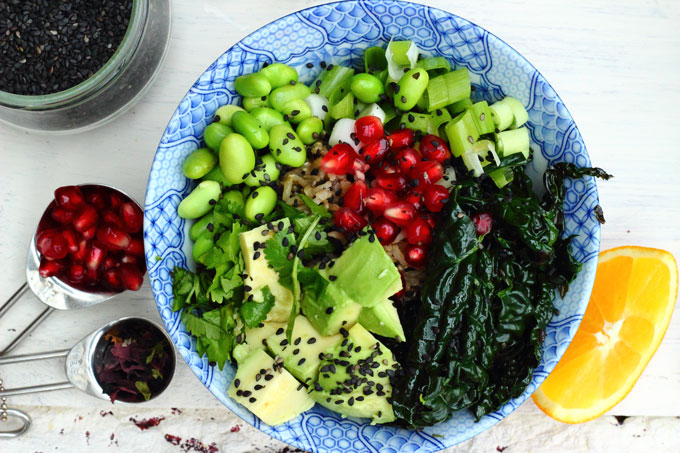 Over the last few days I’ve been thinking about healthy ageing resolutions for 2015.  Nothing drastic – no crash dieting or fasting for me! But after reviewing the medical findings of last year, two in particular stood out. Firstly, the report that found a Mediterranean diet to be more effective than a low-fat diet for preventing cardio-vascular disease. Secondly, the break-through research that found people eating seven portions of fruit and veg had a 42% lower risk of death from all causes (yes – 42%!).  We didn’t cover this – it came out before Kale & Cocoa’s inception – but it was probably the most important, large-scale report of 2014 in terms of healthy ageing. Read about it here www.medicalnewstoday.com/articles/274841.php. Oh – and bear in mind that gorging on fruit won’t help.  Think 5:2 (five veg portions and two fruit portions).

And if that didn’t convince you of the power of veggies, a December study from Cambridge and Southampton Universities found that people eating a diet high in nitrate-rich vegetables could alter the thickness of their blood – lowering the risk of clots, strokes, heart attacks, obesity and type 2 diabetes.  Here’s  the  science www.southampton.ac.uk/mediacentre/news/2014/dec/14_224.shtml and read on for a list of nitrate-rich veggies …

So my resolution for 2015?  Yup – to get more veggies into my family’s daily diet. Without adding to my workload!  How to do this?  Firstly we’ll be eating more vegetable stir fries, curries, gratins, tagines, stews – one pot meals where several veg can be thrown together. Read on for this week’s (edited) recipe from Anna Jones’ inspiring A Modern Way to Eat (it’s fiddlier than I like but it’s the perfect dish for post-Christmas recovery, includes five of your seven-a-day and is delicious).

Secondly – and more radically – we’re going to try eating veggies for breakfast.  Yes, I know that sounds weird. And it won’t happen every day (we still love our porridge pancakes and granola). People all over the world eat vegetables for breakfast – the famous British fry up includes three veggies – but to me broccoli at breakfast still feels weird. By including egg or toast, however, veggies for breakfast seem a little more acceptable. Here are some of the veg-rich breakfasts I’ve been whipping up over the Christmas holidays: sautéed leek and cabbage with a poached egg; sautéed mushrooms and garlic on toast; grilled tomatoes on toast; avocado and rocket on toast; frittata with previously-roasted root veg and kale; scrambled egg, smoked salmon and steamed spinach. Yes, it’s more effort than pouring out a bowl of cereal.  And no, the children aren’t exactly wolfing down the veg element (yet!).  But it leaves me with a virtuous glow.  So when lunch is a sandwich on the go, I don’t feel so bad. If all this sounds too weird, make a smoothie of apple juice, half an avocado, the juice of half a lime and a handful of kale. Smoothies are still the easiest way to consume a glut of veg in one go (more on our fave family-friendly smoothies next month). And you might consider swapping fruit juice for vegetable juice too.

If vegetables were the heroes of last year’s research, who was the villain? Meat, meat and more meat – in particular processed red meat (linked to heart failure – still the biggest killer in the West). And you can forget the BBQ’d meat (linked to Alzheimers and diabetes – we wrote about it here). So, much to the disappointment of Carnivorous Husband, we’ll also be eating less meat in our house leaving more room on the plate for all those veggies.  I think that’s enough resolutions for one year…. Happy New Year to all our followers and thanks for all your support in our start-up year.

Cook the rice according to the packet instructions

Cover the frozen soya beans in boiling water and leave for 10 mins, then drain.

Mix all the dressing ingredients together.

Saute the kale and sliced spring onions in a splash of sesame oil for 2 mins. Then stir in the seaweed and remove from the heat. Cover until you’re ready to assemble the dish.

Pour most of the dressing and half the sesame seeds over the drained, warm rice. Divide the rice between two bowls, top with soya beans, cubed avocado, the kale/seaweed/onions  and the pomegranate seeds.  Sprinkle over the chopped coriander and remaining sesame seeds and drizzle with the remaining dressing.

« THE POWER OF VITAMIN D – HEALTHY CHRISTMAS CANAPES
BOOSTING IMMUNITY FOR 2015, SOUP AND A SALAD »