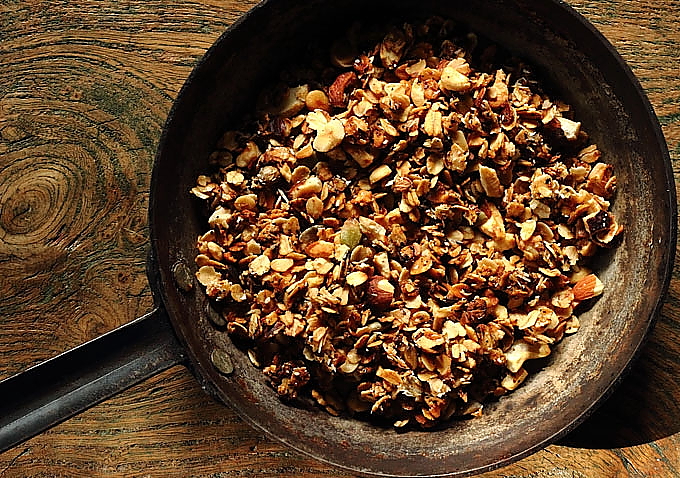 I’ve always longed to be the sort of girl who wafts around making her own granola. Yes, I know making granola is neither arduous nor complicated.  But it often seems a faff – you have to turn the oven on in advance, then you have to hang around while it’s baking, gently prodding and turning. When I wake up feeling like a bowl of granola, I want it in ten minutes not an hour. And that, I guess, is why supermarket shelves are groaning with bags of granola (most full of sugar, I hasten to add).

So imagine my joy at discovering the perfect recipe for no-bake granola.  Not only does it take ten minutes but it’s delicious.  And when I read the October issue of the British Journal of Nutrition (which had an entire supplement devoted to oats), my joy was complete.  Because oats, it would appear, are the answer to many of the things that keep Ms’s Kale & Cocoa awake at night. Here’s a quick summary of the most recent research on the humble oat:

Finally (and this could have contributed to my recent feelings of oaty joy), the Journal of the American College of Nutrition found that moderately-stressed women (can someone show me a woman who isn’t ‘moderately stressed’?) taking beta-glucan supplements became less stressed, had more energy and fewer infections.  Eat your heart out diamonds, oats are a girl’s New Best Friend!

So now I’m throwing oats into everything ….  a handful into smoothies and crumble toppings,  ground oats into soups, stews, biscuits and cakes.  But most of all, I’m making edited versions of  teen-blogger Izy Hossack’s glorious granola (from her just-published debut cook book Top with Cinnamon).  And my children all have their own versions (a cinnamon-spiked, cranberry-stuffed one for Daughter Number One, a nut-free one for Daughter Number Two, a coconut-y one for The Boy,) … that’s how easy and versatile this stove-top granola is.

In a large frying pan, dry roast the oats and nuts (and seeds and coconut if using) for five minutes, until just golden.  Move the mixture to the sides of the pan.  Add the oil and sweetener and stir everything together for a further four-five minutes.  Leave to cool (it will crisp up as it cools).  If you want to add dried fruit or cinnamon or chia seeds (anything you like, frankly), do this now.

We like ours with live yoghurt and fresh fruit. It lasts for a good two weeks (but rarely beyond a couple of days in our house). Oh – and did I mention that oats are chock full of biotin and zinc? Perfect fodder for my hair project (more on that later).