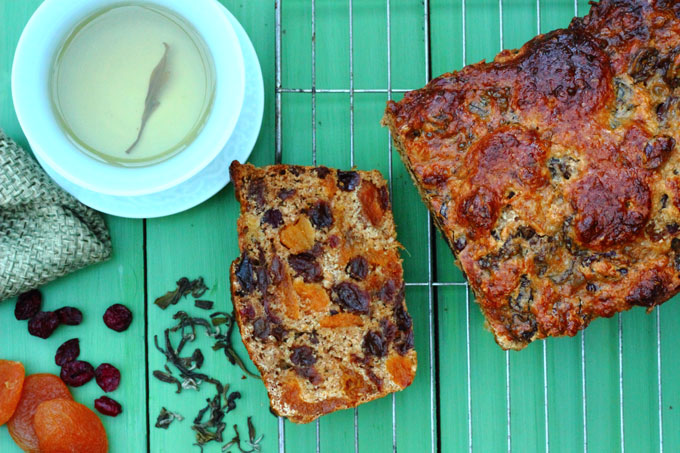 No doubt you’re dieting, detoxing or drying out – it is, after all, the month of penitence, atonement  and resolutions (read ours here and here).  But it’s dark n’ cold out there and my body’s begging for sugar and carbs.  To top it all, my eldest daughter is mid-exams and comes home starving and exhausted. And no, she doesn’t want a salad.  She wants cake.  And, frankly, so do I. So to accommodate dieters and detoxers, this week’s recipe is a fat-free, sugar-free, dairy-free, 100% healthy, utterly delicious spiced fruit cake. I’ve been baking it once a week for the last decade, all the children wolf it down – and it takes three minutes to prepare.  Ta-dah!

To add to its arsenal of healthiness, the cake’s fruit is soaked overnight (yes, you do have to think ahead with this recipe) in age-busting green tea.  And I strongly recommend drinking green tea  when you tuck into a slice of cake.  Why?  Because if (like me) your memory is becoming increasingly thread-bare, green tea may just be your saviour.  In fact, if you want to live a long and healthy life, make yourself a cup of green tea and read on ….

I’ve been a slow convert to green tea – mainly because I didn’t particularly like the taste of it.  But after talking to a tea expert, it appears I’ve been brewing it all wrong and drinking the wrong sort (the stuff in bags, often mixed with ‘flavour’ – you know the ones).  My friendly tea importer showed me how to brew the perfect cuppa. Firstly, use the best quality loose leaf green tea you can afford (I like the Rare Tea Company but before you balk at the cost, take a leaf out of Susan’s teapot – she uses a single spoonful of leaves and tops it up with hot water all day which is what the thrifty Chinese do).  Secondly, don’t use boiling water.  Thirdly, never let the tea stew.  Read more here http://www.rareteacompany.com/recipes/how-to-make-the-perfect-cup-of-tea/

I know all this sounds a palaver but a cup of green tea brewed properly is a revelation (if you don’t have time for revelations, Clearspring’s Japanese Green Tea bags are pretty good too).  Even more revelatory are the extraordinary health properties of this humble beverage.  The last year has seen a flurry of reports suggesting green tea could lower the risk of heart disease, cancer, type 2 diabetes and strokes. An earlier Japanese study followed 40,000 40-79 year olds for 11 years and found that green tea- drinkers had a substantially lower risk of death from all causes (yes – all!). Read more here http://www.medicalnewstoday.com/articles/275206.php

But what’s got me really excited is recent research associating green tea with a 54% reduction in the risk of cognitive decline.  Not only that… scientists now think that green tea may also be able to reverse the effects of Alzheimer’s and dementia. How miraculous is that?  Very simply, it works like this: Alzheimer’s is caused by a build-up of toxic protein fragments called amyloid-beta which deprive brain cells of oxygen, eventually killing them. The result is memory and speech loss, failing motor skills and, finally, death.  Green tea contains a compound called EGCG which stops amyloid plaque building up, breaks down existing amyloid plaque and triggers production of new neurons in the brain section responsible for working memory.  Life Extension magazine ran a lead article on the science a few months ago.  Read it here:  http://www.lef.org/Magazine/2014/8/How-Green-Tea-Protects-Against-Alzheimers-Disease/Page-01

According to Alzheimer’s Research UK, one in three British 65 year-olds will die with some form of dementia, at a cost to our economy of £23.6 billion a year.  I’m doing my bit by switching to green tea (and if you’re wondering how much tea to drink, the answer is at least two cups a day).  And while you’re sipping your green tea and scoffing your cake, you might want to read this year’s Costa prize-winning novel, Elizabeth is Missing.  It’s about a woman with dementia struggling to remember.  It’ll have you downing green tea by the gallon – trust me!

Soak the fruit in the tea with the spice, overnight.

The next morning turn the oven to 170c, grease a loaf tin, stir the egg and flour into the fruit-tea mixture and put the tin into the oven for 1.5 hours, covering with foil after 30 minutes to stop it browning too much on the top.

Leave to cool, then slice and serve.  We like it thinly spread with butter or coconut oil – but we’re gluttons!  Now go make yourself a cup of green tea…before you forget!

« BOOSTING IMMUNITY FOR 2015, SOUP AND A SALAD
WILL CARBOHYDRATES KILL ME? WHOLEGRAINS AND MILLET PANCAKES »