It’s June and, in the UK, that means party-time. June has always been the month of weddings, big parties, Ascot, Wimbledon, Henley Royal Regatta and so on. This year – in my household – June has featured a celebratory bash every weekend, with several more during the week as my daughters celebrate the end of exams, birthdays etc. And then there’s the World Cup (every day). All this means flowing alcohol. Obvs.

But this year I’ve been keeping a beady eye on research into booze. Susan tackled the subject back in January, coming out in favour of a drink or two after the protective effects of alcohol were shown to outweigh its perils. We’ve long been enthusiastic followers of Blue Zones, those pockets inhabited by above-average numbers of the healthy and long-lived, who invariably enjoy a regular drink. And the association between moderate consumption of red wine and heart health has been demonstrated over and over.

Fast forward six months and new research suggests it may be time for a reassessment. Last week saw the publication of a new report linking alcohol to Alzheimer’s. According to researchers at the University of Illinois, alcohol could increase the risk of Alzheimer’s. The prevailing theory suggests Alzheimer’s is caused by the build-up of a protein – called amyloid plaque – in the brain, forming clots and clumps that prevent communication between neurons. Amyloid plaque is usually removed by microglial cells in a process called phagocytosis. This research, however, found that phagocytosis is 15% less effective after drinking. In other words, drinking alcohol makes it a little harder for your body to clear out the plaques thought to cause Alzheimer’s.

So should we be bothered? Only if we’re heavy drinkers or binge drinkers with a raised risk of Alzheimer’s, suggest the researchers. To boot, the research was carried out on rats (which we’re usually wary of) and involved what the researchers described as ‘heavy’ or ‘binge’ levels. Having said this, we recently interviewed an eminent Cambridge Professor of Neuroscience (more to come in our book) who believes this report is only the tip of the Alzheimer–Alcohol ice berg.

But what about cancer? While the association between light drinking and better cardiovascular health has been acknowledged, it’s (allegedly) a different story when it comes to cancer risk. As we wrote back in January, the World Health Organisation classifies alcohol as a Group One Carcinogen. Here’s what we wrote back then:

“It’s known there’s a link between alcohol and cancer – the latest report reveals more about why. Research published in the journal Nature found that consuming alcohol caused healthy stem cells to become faulty – and it’s damaged cells which can become cancerous. It seems that Acetaldehyde, the chemical produced when the body breaks down alcohol, can damage DNA within the blood stem cells. This permanently alters DNA sequences, making the cells more vulnerable to cancer.”

But another study, published yesterday, suggests that cutting back entirely may not be necessary. So good news for (moderately-drinking) June revellers.

A study from Queen’s University, Belfast, found that light drinking was associated with a reduced risk of overall mortality (ie death) and a reduced risk of cancer. Indeed, light drinkers (1-3 drinks a week) had a lower risk of cancer and dying than infrequent/non-drinkers (less than one drink a week) or heavy drinkers (2-3 drinks a day). NOTE: 2-3 daily drinks constitutes heavy drinking, while above 3 was classified as very heavy.

The study looked at over 99,500 American adults, across an average period of 8.9 years. The devil, as always, is in the detail. So let’s consider the ‘detail’:

A ‘drink’ was described as an American ‘cup’ of wine (beers and spirits were included, but I’ll focus on wine as that’s my tipple of choice). An American ‘cup’ is around 220 ml, so already that’s more than a standard UK glass (175 ml according to www.drinkaware.co.uk). Wine comes in a variety of strengths, muddying the waters still further. But let’s assume the people surveyed were drinking averagely alcoholic wine of 13%.

So a ‘light drinker’ (the person with the best possible protection according to this study) is someone drinking roughly between one and four 175ml glasses of wine per week. As the researchers concluded: ‘The results indicate that intakes below 1 drink per day were associated with the lowest risk of death.’ The report also found that the risk of some cancers increased with each additional drink per week, suggesting that going beyond 1-4 weekly drinks really isn’t sensible for anyone with a raised risk or family history of cancer.

Meanwhile another recent study of over 13,000 adults – from Oxford University – found that alcohol in similarly small quantities also benefits cognition. Both non-drinkers and heavy drinkers had greater cognitive impairment than those drinking a few glasses of wine a week. In this case, the researchers concluded that up to 100 ml (that’s a very small glass or half a large glass) of wine a day could benefit the brain, but anything over that was potentially damaging: “Consuming more than one UK standard unit of alcohol per day is detrimental to cognitive performance and is more pronounced in older populations.” [1]

So, yup, that’s well below the UK guidelines of six 175ml glasses a week. The message is pretty clear, particularly for those of us in those crucial mid-life years: enjoy a 175 ml glass of wine 2-4 nights a week but no more. Equally, it’s good news for those worried that the odd glass might be harming them. It’s (probably) not.

Either way, we’ve been drinking less and less since we started our Age-Well Project. Indeed, we’re now both on a one-drink-a-day policy with a couple of mid-week alcohol-free days (ahem…mostly). But if we were being really prudent, we should probably cut back a bit more. But perhaps not in June. We’ll keep you posted.

In the meantime, I’ve been making my own ginger kombucha, and while I should point out that there’s very little medical research to back up any of the claims made for kombucha (although there’s some anecdotal evidence) research suggests its high probiotic content may be beneficial (as in the case of all fermented foods). This version is mildly sparkling, making it more like ginger beer – and a very acceptable alternative to a glass of wine! To get started, you’ll need to buy, beg or borrow a scoby (that’s the living yeasty-bacterial pancake that starts the fermentation process).

Note: my recipe uses much less sugar than normal as I don’t like it sweet, but play around to find your preferred levels of sweetness. The longer you leave it to ferment, the less sweet (and the fizzier) it’ll become.
•9 ginger tea bags (I use Twinings Spiced Ginger)
•2 litres of boiled water
•100 g of sugar

Make a large bowl of ginger tea, add the sugar, stir to dissolve and leave to cool.

Remove the tea bags with a wooden spoon and pour the cool tea over the scoby. I use a plastic box with a lid, but you can use a bowl covered with a clean cloth and secured with a rubber band. Never mix the scoby with metal.

Leave the ginger tea + scoby for at least five days. Then strain with a plastic sieve, reserving the scoby for your next batch. Keep the tea in the fridge and serve it chilled in a wine or champagne glass as the perfect replacement for a glass of plonk.

I’m a novice at kombucha (there are entire websites and books devoted to the subject), so I’d love to hear any favourite recipes or top tips. 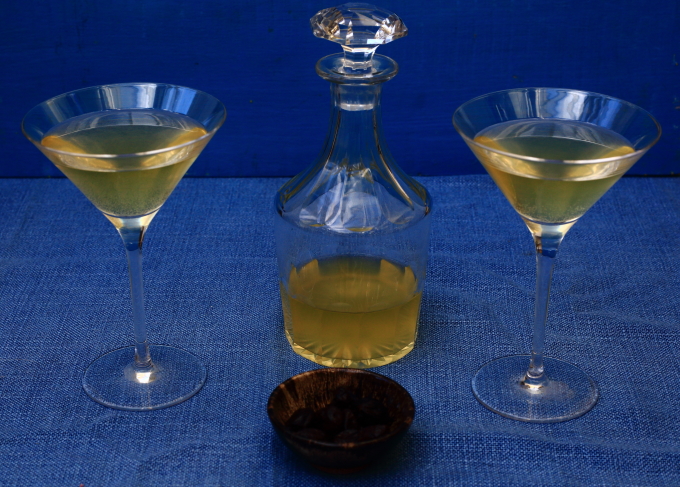 « KALE & COCOA IS NOW THE AGE-WELL PROJECT!
WHAT YOU NEED TO KNOW ABOUT CARB ‘QUALITY’ AND DARK-CHOCOLATE-SALTED-PEANUT FLAPJACKS »