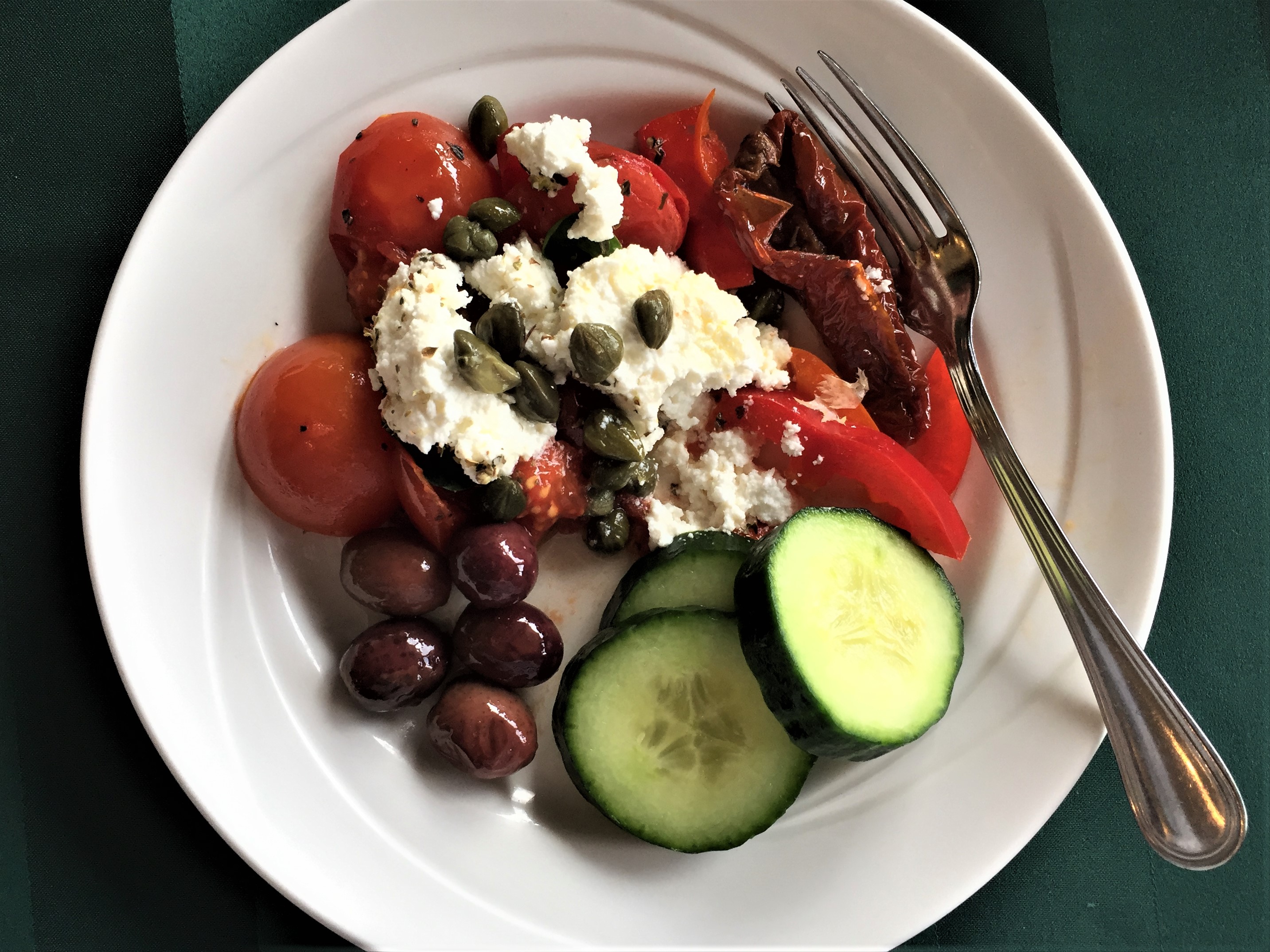 A week of hiking, reading and sunshine on the gorgeous island of Gozo has left me reinvigorated but a little baffled. Here’s why…

The island gets an average 3000 hours of annual sunshine, more than double that of London. So no Vitamin D deficiencies here. The high level of sunlight might also help explain the very low suicide rates (the lowest in Europe). Emerging research suggests the experience of sun-on-skin triggers the production of endorphins.

The Gozitans eat a diet based largely on fresh local produce, much of it organic as pesticides aren’t used (pictured above is what I had for breakfast each day). There are few of the usual fast food outlets and the locals I spoke to described their diet (with hushed reverence) as vegetable potages, olive oil, the local unpasteurised sheep cheese, tomato and bean pates and bread, with rabbit, pork or fish for special occasions.

The Maltese and Gozitans have close networks of friends and family and are devoutly Catholic (divorce was only recently legalised). We like poking around in old churches and while in England churches are always empty, in Gozo they’re humming. We saw people praying (on their knees!) and lighting candles, in every church we entered. If you’ve followed our blog, you’ll know that faith and a sense of spiritual purpose are excellent fodder for ageing well.

Unsurprisingly, when I examined the stats I found the Maltese have impressive life expectancy rates (10th position for 2016 world rankings). Even more impressive are the statistics for what the World Health Organisation call Healthy Life Years (HLY), how long you can expect to live without chronic disease – aka healthspan.

When it comes to healthspan, Sweden and Malta top the EU chart. In both countries, women can expect to live more than 85% of their life expectancy without any debilitating disease, a proportion that reaches over 90% for men.

So far, so good. The Maltese and Gozitans clearly conform to the US National Institute of Ageing’s hypothesis that “the largest clusters of the long-lived are found in countries that have a good diet and close-knit communities.”

And yet we couldn’t help noticing the vast number of very ample people, the many elderly smokers (even smoking – illegally – in bars, in front of No Smoking signs), and the huge portions served in most restaurants.

We also noticed that no one walked or cycled. The hiking routes we took were invariably concrete and wide enough for a quad bike, if not a car. We were overtaken constantly – on footpaths of the roughest terrain – by motorbikes, quad bikes and old cars spewing out plumes of black smoke. But never by other walkers.

So back I went to the statistics. And yes, all is not as rosy as it first statistically appeared.

Malta and Gozo have half the average rate of centenarians, compared to other European countries (a mere third of the British rate). So while many live well until their early 80s, few get beyond that.

More surprising still, Malta and Gozo have the highest obesity rates in all Europe. 58% of adults are classified as over-weight and 22% as obese, in spite of a diet rich in pesticide-free vegetables, olive oil and vitamin D.

It gets worse. Malta and Gozo have the highest prevalence of Type 2 diabetes in Europe.

Their rates for breast cancer and coronary heart disease are also well above average.

Malta and Gozo should, by rights, be Blue Zones. Instead the islands are a ticking time bomb. 39% of Maltese boys (aged 10-12) are obese – making them almost the fattest boys on the planet.

So what’s going on?

The answer may lie in the islanders’ sedentary lifestyle. Apparently, they’re the least physically active in the world, with almost 72% qualifying as inactive. Their children do less exercise than in any other EU country and watch more TV.

They also have one of the highest sugar consumptions in Europe.

According to a Gozitan friend, the shift from an agrarian society to one in which the newly educated have office-based jobs and want to flaunt their new wealth by buying cars is partly to blame. A Maltese friend suggested that the cool winters in unheated houses encouraged heavy carb eating while the summers are simply too hot to be outside exercising.

Our taxi driver added his views: “We eat too late in the evening and snack all day on pastizzies.” These are rather delicious pasties of flaky pastry stuffed with local cheese or peas that can be bought (as we greedily did on several occasions) on many street corners.

So. What did I learn – in spite of the baffling data – on the glorious island of Gozo? Two lines:

You can have nutrient-dense food, endless sun, spiritual purpose and a close-knit family. But these will only do so much. If you’re over-eating and failing to move, everything else is largely redundant.

Right, I’m getting off my butt and going for a (fast) walk… and then I’m googling treadmill desks. Anyone use one? All advice gratefully received!

« WHAT YOUR DOCTOR SHOULD TELL YOU, AND MISO COD
THESE VEGETABLES WILL STRENGTHEN YOUR BONES – AND KALE SHAKSHUKA »