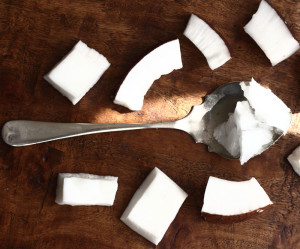 “What if there was a cure for Alzheimer’s Disease, and no-one knew?”

That’s a very big – and very loaded – question. Particularly as the cure in question is one very simple food:  COCONUT OIL.  The internet is awash with stories of carers who have seen remarkable improvement in their dementic loved ones when they start feeding them a small dose of coconut oil each day.

An American doctor, Mary Newport, put her husband on a coconut oil regime in 2008 with startling results. The question above comes from her website and you can read more here: http://www.coconutketones.com/  When I read this website I cried because if I’d known about this in earlier, I might have been able to slow my mother’s decline into dementia. (Or not – the success rate seems to be about 50%)

The theory is that the fats found in coconut oil, known as MCTs (medium chain triglycerides)can  provide ‘fuel’  – ketones – for the brain. A healthy brain uses glucose for fuel, but an Alzheimer’s brain can’t – or can’t very well. However, even Alzheimer’s brains can utilise the ketones in coconut oil for fuel. And a well-fuelled brain works better.

But I don’t have Alzheimer’s, so why bother now?  Research into coconut oil and MCTs is ongoing. More evidence of their powers may be revealed. (Or may not, I know, I know).  In ‘Grain Brain: The Surprising Truth About Wheat, Carbs and Sugar – Your Brain’s Silent Killers’ (a depressing title if ever there was one), Dr David Perlmutter suggests that coconut oil ‘is a superfood for the brain’ that reduces inflammation and stimulates the growth of new brain cells. A big claim for a coconut  but it’s taken a central place in my kitchen. It’s got to be raw, virgin coconut oil – none of that hydrogenated stuff. I buy it from the health food store. It’s not cheap – around £10 for 500g – but a little goes a long way.

Leaving aside all the Alzheimer’s research, it is anti-bacterial and may be beneficial for heart health, although a whole load more research needs to be done. And, most importantly, it is absolutely DEE-LISH, making fried foods – it’s perfect for pancakes – crisp and tasty. It has a sweetness without adding sugar. I used it to fry the onions and spices that are the base of a curry. And it’s a useful weapon on that vast familial battleground: THE HEALTHY SNACK. Like sentries, my children are constantly alert, while I use guerrilla tactics to surprise and defeat them. For them snack = treat; for me snack = opportunity to refuel/grab some great nutrition. But they actually like these:

(this recipe is loosely based on one in Gwyneth Paltrow’s first book, Notes From My Kitchen Table) 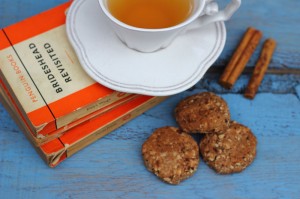 Pre-heat the oven to 170C and line a baking tray with parchment.

Whizz  the almonds in a food processor – you want them to stay a bit rubbly, not turn into butter. Warm the coconut oil in the microwave so it liquifies. Mix all the ingredients together. Form into small patties using damp hand and flatten slightly as you place them on the baking tray. Bake for 20mins – they need to be slightly more golden and look dry on the outside.