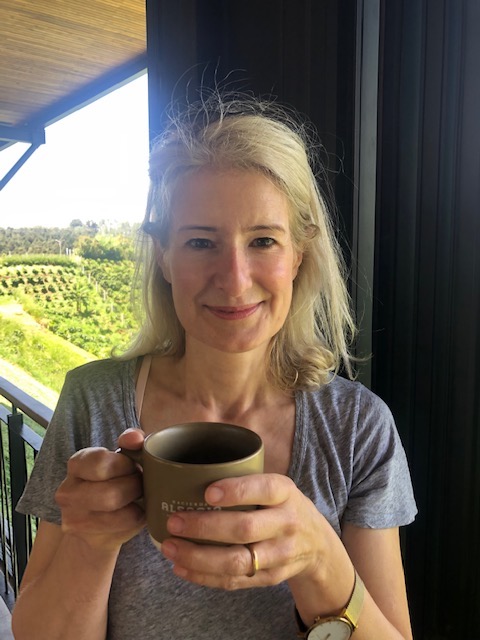 This is me, about to take – I kid you not – my first sip of coffee in 20 years. I gave up when living in California in 1999 (my body was a temple, and all that). The withdrawal symptoms were so debilitating (like a 10-day flu bug) I vowed never to go back. But…..20 years is a long time and the Age-Well benefits of coffee are compelling. When we visited Costa Rica, home of some of the world’s best coffee, I tried it again.

The first sip was shockingly bitter, spreading across my taste buds and lingering in everything I consumed for the rest of the day. That bitterness – and many of the Age-Well benefits of coffee – come from tannins, the same polyphenols found in tea, wine, chocolate, berries and pomegranate seeds. These polyphenols – plant antioxidants – combat cell damage, improve gut bacteria, boost insulin sensitivity as well as decrease blood pressure and cholesterol levels. And we’ve blogged about how coffee benefits cognition here (this post also includes the best-ever chocolate and coffee brownies, aka ‘brainies’, so do check it out).

COFFEE AND YOUR HEALTH: THE LATEST RESEARCH

It’s incredible how, in the last decade, coffee has gone from health pariah to superfood. Recent research has shown that our preference for astringent drinks like coffee, rather than sweet ones, is genetic. But it’s not about taste. Rather, our choices are based on the psychoactive properties of drinks – how they make us feel rather than how they taste.  We choose to reward ourselves with sweet or bitter drinks based on their impact on our mindset, rather than whether we think they’re delicious or not. This has implications for weight management, as does a new study revealing that coffee helps burn brown fat, thus improving blood sugar control and blood lipids. Researchers aren’t sure yet whether it’s the caffeine which activates brown fat or another component of coffee. “Once we have confirmed which component is responsible for this, it could potentially be used as part of a weight management regime or as part of [a] glucose regulation program to help prevent diabetes,” said Professor Symonds of the University of Nottingham, who led the research.

Research into the health properties of coffee is ongoing, with new papers appearing on a regular basis. With my family history of dementia, it’s the impact of coffee on the brain that interests me most. Research published late last year suggests that the key to coffee’s brain-protecting benefits lie not in its caffeine content, but in the existence of compounds released in the process of roasting the coffee beans. It appears that phenylindanes (produced by the roasting process), inhibit the amalgamation of tau and beta-amyloid. These toxic proteins play a key role in neurodegenerative conditions such as Alzheimer’s and Parkinson’s Disease.

It appears that a longer roasting time causes the coffee beans to produce more phenylindanes. This suggests that dark-roasted coffee — whether regular or decaf — has the strongest protective effect on the brain. “It’s the first time anybody’s investigated how phenylindanes interact with the proteins that are responsible for Alzheimer’s and Parkinson’s,” says Dr Mancini, who led the research. “It’s interesting, but are we suggesting that coffee is a cure? Absolutely not,” he cautions.

Leaving aside the health benefits of coffee, what I took from my visit to the plantation is the preciousness of this crop, and how – like so much else – it’s threatened by climate change.

There is one coffee harvest each year, and each plant bears around 700 berries. It takes between 70 and 100 berries to make a cup of coffee which means – you can do the maths as well as I can – each plant produces just seven to ten cups a year. Every berry is picked by hand, and the harvest is dependent on a delicate syncopation of climate and botany. In recent years this ecosystem has been disrupted by more frequent El Niño events which alter rainfall patterns. The growers fear that one year the rains won’t come in time for plants to flower, meaning there will be no harvest, and no income for them and their workers.

HOW DOES COFFEE MAKE YOU FEEL?

After my one, precious, cup, how did I feel? Well-caffeinated certainly. I felt buzzed and very awake, despite jetlag, for the rest of the day. I slept well, however. But I have rarely picked up a cup of joe since. What are your views on coffee? When I posted the picture above on Instagram the response was immense. Clearly everyone feels very strongly about their daily cup! What about you – can’t live without it or never touch the stuff? Let us know in comments below.