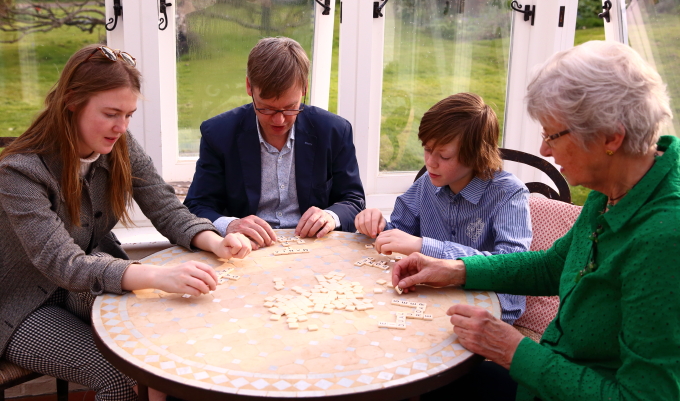 The nights are drawing in, and the days are getting colder. Our brains may be telling us to hunker down, to switch into hibernation mode. But all the research says otherwise. A report out last week suggests that instead of becoming less active as we age, we need to become more active, whatever the weather.

Forget the bed socks and flannel pyjamas and treat yourself to a new pair of trainers and a set of waterproofs instead.

On a less intimidating note, another report out last week found that playing (non-computer) games can keep our neurons firing. I like this report. Mainly because I like playing board games. But I also like it because playing games is such a simple way to stay razor-sharp: you can play with anyone, young and old; you can do it in your pyjamas and bed socks; you can do it any place and at any time. A girlfriend and I sometimes go to a bar and play Bananagrams over a glass of wine. Yes, we get a few peculiar looks, but I’ve no idea why as it seems a perfect night out to me.

So back to the first study, published in the European Heart Journal: research involving over a million people past the age of sixty found that maintaining – or improving – activity levels as we age is essential for reducing the risks of heart attacks and strokes. In this study, those who actually increased their activity level saw an 11% fall in their chances of developing heart and blood vessel issues. Those who let their activity levels lapse (which is typically what happens over the festive period and as we age) saw their risks rise by 27%.

As their benchmark, the researchers used the following definitions:

Already doing this? Well done and keep going. Not quite there? You know what to aim for!

You can read more here. Another report that piqued me recently was a study suggesting that people who included 3-4 minutes of breathlessness in their regular exercise programme dramatically improved their memories. In this study, researchers tested the type of exercise most conducive to improving memory. The participants were split into three groups: one did stretching exercises; another walked at moderate speed; the last group walked with periodic intervals on a steeply cranked treadmill. Those alternating between inclines on a treadmill showed not only dramatically improved fitness but dramatically improved memories. Don’t worry if you don’t have access to a treadmill. All you need to do is include a few hills on your 30 minute brisk walk. If you don’t have access to hills, try jogging between lamp-posts. It’s really just a version of the HIIT we write about in our book. But if it keeps memory sharp and the body fit, that’s good enough for me.

So what about playing games? This report comes from the University of Edinburgh and refers to board and card games – not digital or computer games. A cohort of Scottish people who’ve been studied since their births in 1936 were examined – regular games-players scored better on memory and thinking skills. The researchers believe that ageing well isn’t simply about the general intellectual engagement and social activity that come from playing games. They think it’s the actual cognitive demands of playing these particular games. Even more striking, they found that those who increased their time playing board games in old age experienced less decline in memory and thinking speed. It’s never too late to start playing games (the data suggests that some of the top performers were playing a game every day). So why not cross out that list of Christmas TV and replace it with games?

I know the question on everyone’s lips, because it was on mine too: what games did they play? Christmas is coming and we want to know! Sadly, this is one of those annoying studies where you drill down through pages and pages of graphs and data only to find no record of the games they played! So I emailed the team at Edinburgh University who told me they hadn’t asked for specific games (which they now regret) but had prompted by suggesting games like cards, crosswords, chess and bingo. ‘The only conclusion we can draw so far is that it doesn’t appear to matter what specific games, as long as you’re engaging your brain,’ added the researcher – who has also promised to investigate more fully in the next phase of their research. You can find the report here.

Our family favourites (unproven as far as cognition goes) include: Scrabble, Upwords, Boggle, Bananagrams, Chess, Anagrams, Mastermind, Rummikub, and various games that require nothing more than pen and paper. Susan’s family is partial to Mahjong, a Chinese game which has been proven by a university in Hong Kong to reduce cognitive decline. Read more here.

« THE SCIENCE OF AGEING – EXPLAINED VERY SIMPLY!
WHY A BOOK IS EVERYONE’S BEST FRIEND AT CHRISTMAS »