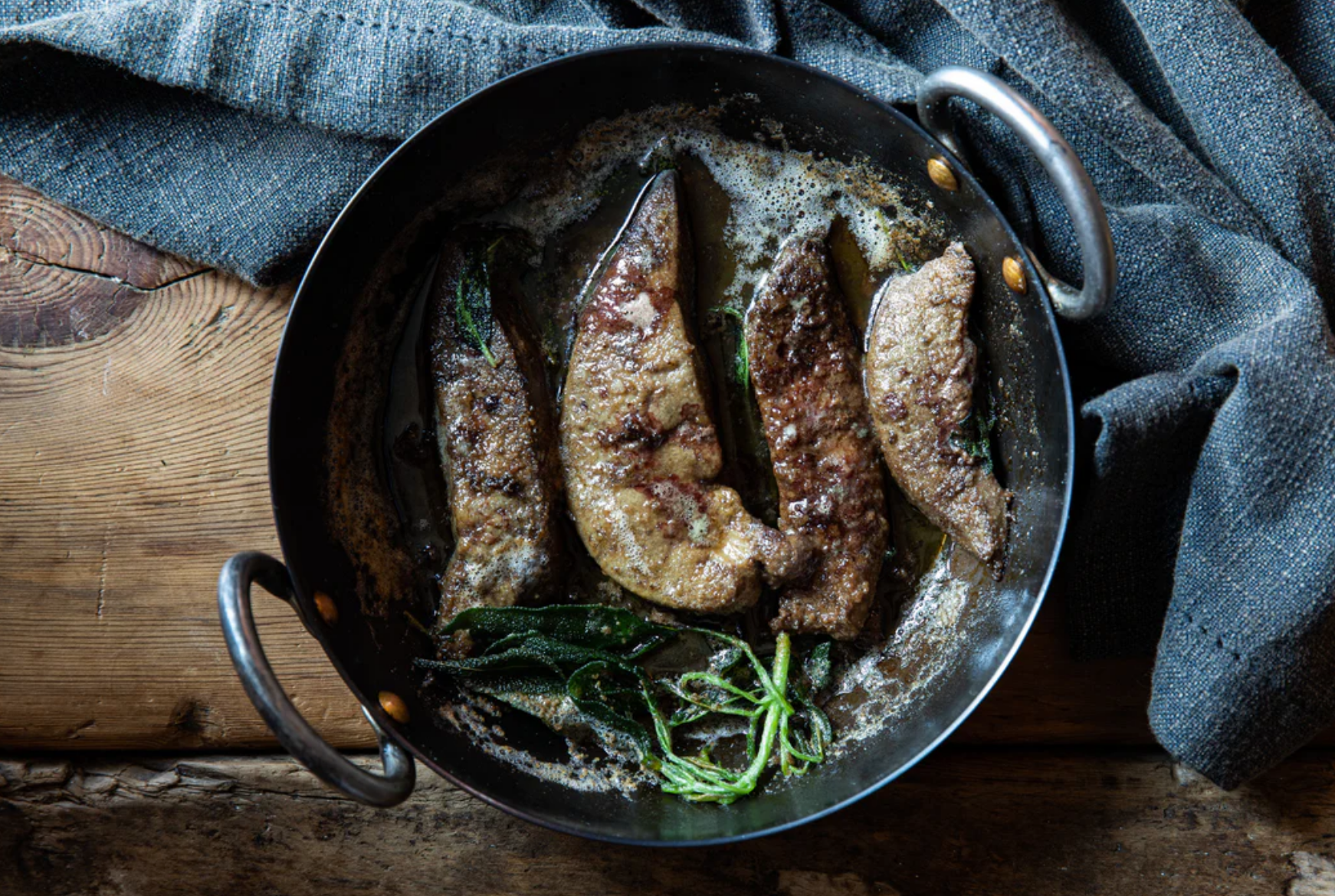 Last night The Husband and I agreed that the Queen’s exit from this world was exactly how we’d like to exit: still in our rights minds, mobile until the near end, disease-free, smiling. And 96 – a ripe old age. Scroll to the end to see my favourite recent article on how best to reach a ripe old age. Or start here to understand how eating liver might help us achieve this. Yes, liver… although the Queen’s favourite dish – I’m reliably informed – was a medium-rare steak.

When I was a child, I regularly ate offal. It was cheap (we had no money, unlike the Queen) and my mother knew it was nutritious. At school, liver and onions was regularly on the lunch menu. But can you find liver or kidneys in the supermarket now? Not where I live. I rarely see it on a restaurant menu either. And my kids tell me it’s no longer served up at school. In fairness, my eldest daughter said her school had served liver occasionally but no one – except her – ate it. Everyone else opted for pizza.

But so what? Well, if you’ve read Younger You: Reduce your Bio Age and Live Longer, Better – an account of Dr Kara Fitzgerald’s study that resulted in a group of older people turning back their biological clocks by 3.23 years following her 8-week programme – you’ll know that liver was a major component of her age-reversal plan.  We wrote about Fitzgerald’s programme here.

In fact, Fitzgerald describes liver as ‘an astonishing powerhouse source of methylation-friendly nutrients’ and ‘number-one’ on her list of DNA methylation superfoods.

So, what’s methylation and why does it matter?

Methylation is a biochemical process that takes place in every cell of our bodies, day and night. Think of it as our cells breathing. As each cell metaphorically inhales and exhales, it rids itself of harmful chemicals, it makes white blood cells for our immunity, it makes energy for muscles, it makes neurotransmitters so that we can learn and remember.  If we’re stressed and producing too much adrenalin, methylation is the process that breaks it down and metabolises it.  Importantly, methylation produces new DNA, repairs existing DNA and turns on and off other DNA.  Methylation influences the 1,200 of the 1,500 genes that are turned ‘on’ and most of the 21,000 genes that are lying dormant (turned ‘off’).

As we get older, our bodies are less good at methylation. But if our methylation doesn’t work properly, we’re less able to fend off heart disease, Alzheimer’s, cancer, even depression and anxiety.

But the most important type of methylation is called DNA methylation.  This is the process by which our genetic predispositions are kept in check or altered. Sitting on top of every strand of DNA are methyl groups capable of turning our genes off and on. DNA methylation has been described as the punctuation in a sentence – the commas and question marks that enable a chain of letters and words to make sense.

This probably sounds complicated but it’s not really.  I’ll give you a very simple example from my own DNA: I carry a gene that makes me more likely to have breast cancer. On top of that DNA sits a series of ‘pipes’ that are constantly opening and closing.  If I drink lots of alcohol (a known methylation destroyer), the pipes will weaken. Unable to close, they could allow a tumour to grow unimpeded.  If I do lots of walking however (or eat lots of methyl donors), the pipes will remain strong, opening and closing to let the right things in and to keep the wrong things out. For example, effective methylation can turn ‘on’ a gene that produces a tumour-killing protein. This process is known as epigenetics. Kara Fitzgerald and other scientists have discovered that we can help or hinder this process through lifestyle choices.

So where does liver fit in? Liver is her ‘number one’ methyl donor. ‘No other food matches liver’s broad-spectrum methylation support,’ she says. Liver is chock full of the nutrients that best support the methylation cycle. More so than any other of her ‘DNA Methylation Dozen’ – which I’ll come to in a minute.

Going back to my example, this means that the nutrients in liver (folate, B12, betaine, choline, methionine, zinc, vitamin A etc) are exactly what my body needs to keep the bad pipes to my breast cancer gene turned off and the good pipes – those that break down tumours – turned on. This is putting it very simply, but I hope you get the drift.

Incidentally – and you probably know this – all of us are constantly fending off infinitesimal cancerous tumours.  And all of us carry genetic weaknesses or predispositions to all sorts of things.  One of the reasons they fail to develop into full blown illness is down to how well our bodies methylate.

This week I used grass-fed liver from Swaledale in Yorkshire (where I’ll be on Thursday 22nd September giving walking masterclasses and talking about the power of being on foot – do join me). But there are plenty of other online butchers that sell liver or you can ask your local butcher. I also like the organic chicken livers from Daylesford butchers in London.  A typical liver dish costs around £5-6 for four servings, so it’s also a snip.

Because liver is a detox organ, it needs to be as free from contaminants as possible, hence Fitzgerald says our liver should be organic or grass-fed. Otherwise, she suggests taking liver capsules.  How much liver to eat? To turn the clock back, Fitzgerald urges us to eat three portions a week.  Interestingly, my scan of old cookery books revealed plenty of offal recipes, indicating that liver was a popular dish in the past. Eliza Acton liked calves’ liver, simmered with white wine, parsley, mace, carrots and onions (if you want to know more about how I cooked the recipes of our ancestors and Eliza Acton, I’ve got events coming up in Grassington, Yorkshire and Sevenoaks, Kent – both include tea and cake – please do join me.)

Last week I cooked the dish below, using first lamb’s liver and then beef liver.  Both were pronounced delicious by all the family (apart from the vegetarian daughter), although we preferred the lamb’s liver which is a little less pungent. If you can’t stand liver, here are Dr Fitzgerald’s other 11 superfoods for keeping our faulty DNA in check and our good, protective DNA turned ‘on’:

And here’s the article I promised on how to get to a ripe old age. It’s well worth a scan, as it’s full of easy, sensible tips.

Treat this recipe as a blueprint, adding whatever herbs or spices you like. I’ve added mushrooms in some versions, which worked beautifully. If you include rosemary and mushrooms, you’ll have 3 powerful methyl donors in one dish.  Serve with spinach and cauliflower – and that’s five methyl donors in one go! The bacon is optional but I’m feeding (grown-up-ish) children so the extra flavour helped the liver go down.

Soak the liver in milk for 30 minutes. While it’s soaking, slice and saute (in butter or olive oil as you prefer) the onion, garlic, bacon and rosemary.

Remove the liver from the milk. Slice it into fork-sized pieces and toss it in the seasoned flour to coat well.

Add the liver to the onions and quickly brown (2-3 minutes).  If you’re including mushrooms, slice and add them now.

Pour in the port, hot stock and pink peppercorns.

Bring to the boil. Simmer for 1-2 minutes, season and serve.  The liver should be soft and slightly pink inside.

PS it’s not the dish in the picture – blame my new laptop which no longer works with my camera!

« BRAINS, HEARTS AND CHOCOLATE – THIS SUMMER’S AGE-WELL RESEARCH
How to help your eyes age well »