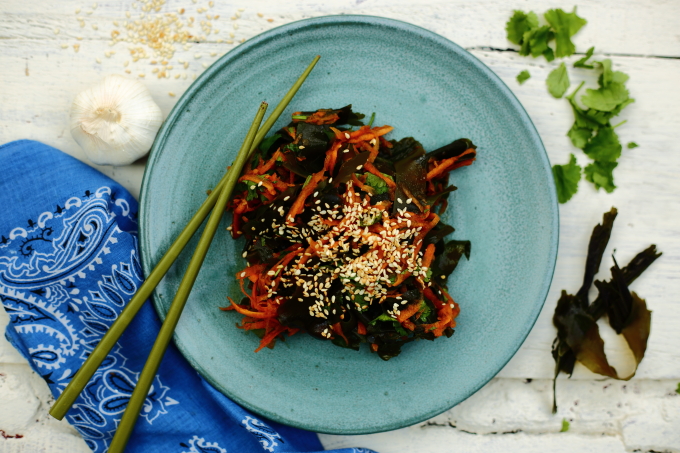 If you asked me to name the most hyped food of 2015, I’d have to say seaweed.  This year’s seen a spate of headlines on the benefits of eating seaweed – not to mention numerous glossy supplements in which celebrity chefs offer up their favourite seaweed recipes.  In July scientists in the US made the news with their discovery of a seaweed that tastes like bacon (yes, really).  Then seaweed hit the jackpot again when Jamie Oliver and Dan Buettner named it as one of their top foods for longevity. In fact Jamie called it ‘the most nutritional vegetable in the world’ and credited his recent weight loss to eating the stuff.

Low in carbs and calories, seaweed is rich in minerals, vitamins, amino acids and antioxidants (apparently kelp has a staggering 46 minerals, 16 amino acids and 11 micronutrients, making it twice as nutrient-rich as our namesake, kale).  Seaweed is also a natural source of vitamins A, B1, B2, C, D and E as well as calcium, zinc, iodine, magnesium, iron, potassium, copper and Omega-3s.

Because of the low rates of ovarian and breast cancer in Japanese women, studies are currently investigating the role of seaweed in fighting certain cancers and other inflammatory diseases.  Meanwhile researchers at Newcastle University, recently identified a compound in seaweed that reduces the amount of fat the body absorbs, leading to speculation that seaweed may help you lose weight (a la Jamie). Other studies have linked seaweed with reduced blood pressure.

But where seaweed really scores is its high levels of iodine.  Experts believe 70% of British women don’t get sufficient iodine (found in fish, shell fish and seaweed).  Apparently we women store it in our breasts (it’s amazing what you learn blogging!), so the bigger your boobs the more iodine you need.  Iodine is essential for the thyroid gland, enabling it to regulate the metabolism and maintain a strong skeleton and a healthy brain.  If you’re suffering from fatigue you may have a sluggish thyroid, in which case try the recipe below – each portion of which contains a whopping 400% of your daily iodine requirement (RDA) as well as 80% of your magnesium and 30% of your calcium requirement. But beware – overdosing on iodine can result in thyroid disorders (interestingly Japanese women – many of whom have an iodine intake 800% higher than the average British woman – have lower rates of ovarian and breast cancer but higher rates of thyroid cancer) and while this usually occurs when people take excessive iodine supplements, it would be wise to follow our usual mantra of ‘everything in moderation.’ Dr Gillian McKeith suggests a handful of seaweed (roughly a portion of the salad below) three times a week.

What I particularly like about seaweed, however, is the way it works on both the inside and the outside. Dermatologists rave about its effect on skin – which is why it’s often found in skincare products. And trichologists praise its role in hair loss prevention (if your thyroid slows down, your hair can fall out). And that’s another reason I’m keen to include more seaweed in my diet.  I’m still shedding more hair than a Siamese cat in summer.

I confess I haven’t cooked much with seaweed in the past.  But I love the idea of it – sustainable, often local, inexpensive (in theory).  Reading up on its battery of nutrients for my last post on Blue Zones got me rifling through my collection of seaweed recipes.  I’ve always added the Cornish Seaweed Company’s sea salad to my fish pies and to our popular Kale & Black Sesame Rice Bowl, but eventually Carnivorous Husband and I agreed the recipe below ticked all the boxes (easy, quick, delicious, minimal ingredients list, pronounced delicious by teenage daughter).  This is best at room temperature and can be served with a piece of grilled fish.  Or toss some cooked soba noodles through it while the noodles are still warm and drizzle over some extra sesame oil. It’s an edited version of a recipe from the Australian nutritionist-chef Lee Holmes’s book, Supercharged Food and keeps for several days in an airtight box in the fridge.

Soak the wakame for 10-15 minutes or according to pack instructions. While it’s soaking prepare the other ingredients by putting everything except the carrot, coriander and sesame seeds into the bottom of a bowl and whisking together. Then add the grated carrot.

Drain the wakame, snip off any tough stems and roughly chop (I use scissors for this).  Then add the wakame to the bowl, mix it in and top with the coriander and sesame seeds.