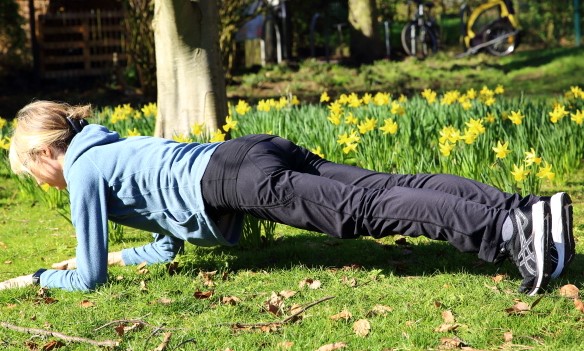 A doctor friend recently messaged me to check I was still doing the odd plank or lifting the occasional weight.  I confessed that I’d missed a few days in the aftermath of my father’s death. But explained that I’d also felt a strange compulsion to do bicep curls as I grieved. Lifting weights, I added, had given me a sense of certainty at a time of flux and pain, although I had no idea why.

‘Listen to your body,’ she replied, before sending me a stack of studies suggesting resistance exercises can ease symptoms of depression. Last week several reports on ‘muscle’ dropped into my in-box.  They made for astonishing reading. And so I’ve spent the last few days lifting (not just weights – chairs, bins, tables, shopping, anything that taxes my muscles), planking, squatting and lunging. Meanwhile, Susan’s been hard at work with her kettlebells.

I know we’ve written previously about the importance of bearing weight for preserving muscle mass and bone density. But bear with me… because what I’m about to share will motivate you to contract your muscles at every opportunity.

Let’s start with depression.  I know it’s spring and vaccines are here, but depression and anxiety are rife post-pandemic. And if building muscle can help, all the better.  When researchers examined 33 clinical trials – involving over 1,800 people – they found those with mild-to-moderate depression who worked with weights at least twice a week saw ‘significant’ improvements in mood, comparable (intimated the authors) to taking anti-depressants or having therapy but without the associated cost or side-effects.   We know that aerobic exercise and brisk walking can lift our mood and help counter depression, but how often are we told that pumping iron has the same effect?

Next up is a study published in this month’s Cell Metabolism, which looks at what happens when our muscles are put under stress (which means repeatedly worked).  We’ve written about the three different types of contraction here, but until recently muscle work was only considered an effective means of building and preserving … well, muscle. But now it seems that muscle movement may be doing a whole lot more.  The very latest science (and much of this, although not all, has been done on mice and fruit flies) suggests that when muscles contract, our skeletal muscle cells produce a protein that protects the brain and retina from natural deterioration.  Many of the illnesses of old age – including dementia – are thought to be the results of proteins misfolding inside our cells as our bodies become less efficient.  But when we work our muscles, a myokine called Amyrel is produced. Amyrel plays a pivotal role in managing the folding of cellular proteins.

This sounds complicated, and it is. But if you think of each of your cells as a miniature laundry cupboard containing all your essential household linen, it’ll become a little clearer (I hope). When we’re tired and rushed we throw our clean laundry, un-ironed and unfolded, haphazardly into the cupboard. The creases become entrenched, the linen cupboard spills over, no one can find anything, the beds go un-made, the towels become tangled in the sheets, the house slowly falls apart. You get the drift.  Amyrel is your dream housekeeper – s/he irons, folds, sorts and makes beds with hospital corners.  So… when you contract your muscles Amyrel appears, overseeing the tidy folding of proteins inside the cells of distant tissues like the brain and the retina.  And because of this, your brain has a better chance of staying clear and sharp. Likewise your retina (and eyesight).

We’ve never really thought of our muscles as being so inextricably bound up with other parts of our body.  It’s an intriguing idea – and one that’s reflected in another piece of research from Duke University in the US. This study found that a moving muscle (whether walking or weight-bearing) blocks an inflammation-causing molecule known as interferon gamma.  In other words, activated muscles help keep inflammation at bay.

Finally, another study arrived on my desk speculating that skeletal muscle plays a prominent role in controlling the body’s glucose levels, vital if we’re to steer clear of metabolic diseases like diabetes.

All of which is to say keep exercising, and keep lifting weights. I do ten minutes, approximately five times a week with a pair of – progressively heavier – hand-weights. Read why ten minutes is all you need here (there’s also a good nine-minute programme to get you started).

But I’m not finished with muscle yet. Because yet more studies appeared on my desk, this time suggesting that how we eat also affects the performance of our muscles. I’ll start by busting the old myth that building muscle requires the consumption of large amounts of protein. A ten-week muscle-building and dietary programme involving 50 mid-lifers found no evidence that eating a high-protein diet increased strength or muscle mass any more than a moderate-protein diet.

So wave goodbye to protein shakes and steaks. And carry on eating as you are, although bear in mind that ‘moderate protein’ here meant 1.2 g of protein per kg of body weight, and participants were eating lean steak every evening, which isn’t something we’d recommend.

While we don’t need extra protein, it turns out that our muscles respond with particular enthusiasm to … vegetables! An Australian study published last week in the Journal of Nutrition found that people eating a nitrate-rich diet, predominantly from vegetables, had better muscle function in their lower limbs – regardless of what exercise they did or didn’t do. Of 3,759 people, studied over 12 years, those who ate the most vegetables were stronger, with walking speeds that were up to 4% faster than their peers who ate fewer vegetables.

In this study the best vegetables for feeding muscle were nitrate-rich plants like lettuce, spinach, kale and beetroot.  To this list, we’d add: chard, rocket, radishes, turnips and watercress.

Lastly, Susan spoke in her recent (marvellous) webinar on eating well to age well (find it here) about the importance of omega-3s for muscle and walking speed, based on a December report that found supplementing with 2g daily of omega-3 could increase muscle mass as well as accelerating walking pace. Don’t fancy supplements? A tin of sardines eaten five times a week would deliver the same amount of omega-3, with the addition of calcium and protein.

Sorry to bombard you with facts and stats, but at least the message is simple: lift a few weights (digging and lugging a hoover round are good alternatives) or do some resistance training most days. And keep eating plenty of vegetables with some oily fish on the side for good measure. Couldn’t be simpler really…