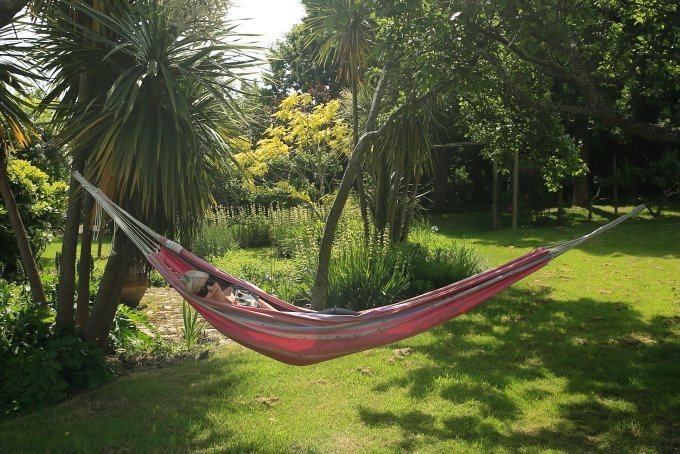 I’m normally urging our readers to walk, dance, play ping pong, cook, garden and so on. But not today. That’s because I’ve been investigating the extraordinary power of short rests. Not naps, but something researchers call ‘wakeful rest’. It’s not something that comes naturally to us at the Age-Well Project.  Both Susan and I have a knack for cramming in as much as we possibly can, and then a bit more on top.

What I’m about to reveal also has implications for poor sleepers. Because it turns out that wakeful rest can be as powerful – in some respects – as sleep. I’ll also be touching on the subjects of hammocks and rocking chairs, which appear to be the best places for indulging in a spot of wakeful rest (or a full-on nap, for that matter).

Ten years ago a group of researchers investigated the quality of rocking naps – these were naps taken on a bed that gently swayed or rocked (much like a hammock) and found that rocking nappers fell asleep more quickly and slept more deeply. Eight years later the experiment was repeated but this time it included women and took place over entire nights, and participants were tested afterwards. Yet again, the participants fell asleep more quickly than when in a regular bed, and EEG revealed that they slept more soundly with deeper slow wave sleep. The following day they remembered more too.  The EEG showed that their sleep spindles were denser – and sleep spindles are associated with our ability to remember.

Earlier tests in mice, put to sleep in rocking contraptions while EEG monitored their brains, suggested that ‘rhythmic stimulation of the vestibular system’ eased them more swiftly into a deepened state of sleep, although how or why still isn’t entirely clear. Either way the researchers think that ‘rocking might represent a promising non-pharmacological intervention to accelerate sleep onset and improve sleep quality.’

Most of us have rocked a baby to sleep at some point, so perhaps it’s not rock-et (ahem) science.  But I’ll certainly be spending a little more time in my hammock this summer.

I won’t be sleeping, however.  But I will be lying there rocking for ten minutes, and I’ll probably be doing this after my online French lesson. Why? Because multiple studies over the last decade have also found that we recall with greater clarity and proficiency when we have a ten-minute rest immediately after having learnt something new, whether it’s spatial, temporal, linguistic or anything else for that matter.

So if you’re learning something new, or want to remember the book you’re reading or a new route you’ve discovered, take a ten-minute rest. Perhaps in a hammock or a rocking chair. The important thing is to remain as blank-minded as possible.  Mind wandering is fine. Scrolling on your phone or chatting to someone is not.  When we shift from learning something new immediately to another activity, we impede the brain’s ability to consolidate memories and new knowledge.

But here’s the really fascinating finding: In these experiments participants who rested for ten minutes recalled considerably more than non-resters when tested ten minutes later, thirty minutes later – but also seven days later (and that was without any intervening retrieval of knowledge or memories). Which is to say, the ten minutes of down-time was sufficient to deeply embed new memories. The researchers summarised it like this: ‘We propose that wakeful resting after new learning allows new memory traces to be consolidated better and hence to be retained for much longer.’

And now for something quite remarkable: When the researchers carried out another experiment in which some participants rested, others slept and a final group got on with their lives, the researchers assumed the full sleepers would demonstrate the best recall.  They were wrong.  Wakeful resters remembered as much as sleepers.  Both recalled significantly more than those that got on with something else.

The researchers trumpeted this as ’the first evidence that wakeful rest can improve the integration of new … memories in humans, a function that has, hitherto, been associated with sleep.’

When it comes to older people, a further study showed that age was no impediment to using judicious rest periods in order to improve recall and memory. Older people responded as well as younger people, with the researchers concluding that ‘a short break immediately after information uptake may help [older people] better retain the previously learned information, while distraction after learning tends to weaken memory retention.’

Why might this happen? Well, scientists have just discovered a new neuron in the brain-region known for learning and memory (the hippocampus) which might explain the power of wakeful rest.  They’ve called it TORO (Theta-off, Ripple-on). TORO neurons signal to the brain when something worth remembering has taken place.  TOROs, however, struggle to compete with information coming in from other parts of the brain.  They need plenty of space in which to do their thing.  But when activated TORO neurons do something else too: they slow down brain activity, which makes us feel calmer.   So they need quiet in which to work but they reciprocate by giving us a shot of serenity.

The reverse is also true. If we’re on the move (busy, busy, busy), TOROs simply can’t function as well, making it more difficult for us to lay down long-lasting memories.

“This new type of neuron is maximally active when awake – but quiet – or deeply asleep,” explained the researcher, Prof Marco Capogna. The discovery took place in mice but the researchers think it could also apply to humans.

So there you have it! If you’re learning something new or want to remember something special, take a 10-minute wakeful rest immediately afterwards.

And treat yourself to a hammock this summer. Then dust off Granny’s rocking chair ready for the autumn.  Alternatively, take a trip on a boat. Susan had her best ever night of sleep while rocking gently on a barge…

« How to age well like the Queen!
Want more ‘energy’ to age well? Here’s how »