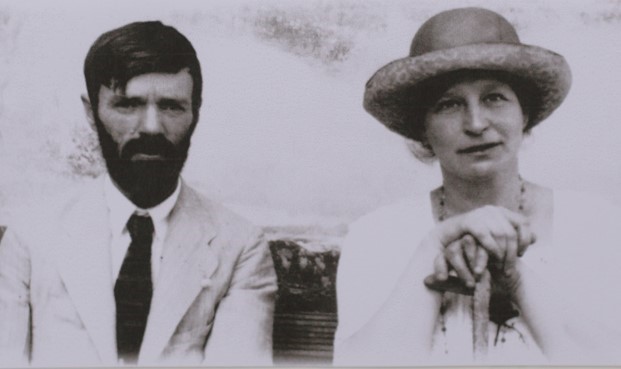 Every now and then the two facets of my life come together in a moment of perfect harmony. This happened recently as I researched the Blue Zone of Sardinia for our Age-Well Project – which also happened to be the same time I was completing research for my novel, Frieda: The Original Lady Chatterley (which published yesterday and is currently – to my great excitement – The Times Book of the Month). Frieda, wife of writer, DH Lawrence, and the inspiration for his Lady Chatterley, travelled with Lawrence through Sardinia at precisely the time its current centenarians were being raised. Could I learn something?

As it happened I – and others – could. Sardinia, an island famed for its high concentration of long-living men, was visited 20 years’ ago by a scientist who studied all 377 Sardinian municipalities, putting a blue mark on those with large numbers of centenarians (3-5 times the number of other parts of Sardinia). He found 14 towns with very high numbers of exceptionally long-lived people, often male. Other than their high numbers of long-lived inhabitants, these 14 municipalities had several factors in common:

For corroboration, I turned to DH Lawrence’s account of travelling with Frieda through the remote hinterland of Sardinia ninety years ago – around the time some of its current centenarians were growing up. These were the exact towns and villages now revered for their health-giving properties. Lawrence noted the following in his essay:

His descriptions of the food make grim reading. He and Frieda have to wait hours for the food to be cooked over fires. When it comes, it’s invariably spit-roast meat (sometime palatable and sometimes not). There are few vegetables, but always olives. A typical meal was meat, olives and some bread with the local firewater (Aqua vitae), red wine and coffee. In the morning there was no food anywhere in the town until a delivery of bread arrived (which was often late in the day). He and Frieda complained about the lack of breakfast and left the area as quickly as they could. The rooms were cold, the food sparse, the landscape unforgiving and the people unfriendly, they said.

But this is the Sardinia where today’s centenarians were raised. In recent interviews the centenarians repeatedly make the point that their lives were hard. It’s this resilience that many researchers now believe plays a crucial role in longevity. Professor Lisa Feldman Barrett, in her study of SuperAgers, calls it ‘grit’ and describes it as ‘the ability to use your unpleasant feelings as fuel … as a signal to keep going.’ Feldman Barrett explains that most mid-lifers today shy away from things that are difficult or challenging, urging us instead to embrace things that make us ‘feel unpleasant in the moment.’

The Sardinian community Lawrence describes in 1921 displays many of the things regarded as age-protective: an active population (always walking, tending their vines, turning the spit, cleaning, gardening); regular consumption of red wine; organic and pesticide-free meat and plants; communities with a tradition of trust and mutual support; regularly going hungry (aka fasting); sunlight which means Vitamin D and – we suspect – other health-enhancing properties; limited pollution and limited ingestion of chemicals. But it’s the ‘grit’ that makes this region of Sardinia so distinctive. In this remote, barren landscape life was tougher than anywhere else in Italy.

Lawrence’s account of travelling with Frieda in the Blue Zone region of Sardinia is a salutary reminder that life in the Blue Zones wasn’t all sunshine and roses and vegetables. A large project is now underway to map the genome of these long-living Sardinians and we’ll keep you posted.

In the meantime take what you want from Blue Zones research – but keep asking questions. The centenarians living in many of these longevity hotspots were born and raised a long time ago often in great hardship. Historical accounts (like Lawrence’s) remind us of this. Keep moving, stay resilient, build a community of friends and family, enjoy a little social red wine and coffee, appreciate your elders, don’t over-eat and don’t be afraid of the odd hunger pang.

As I write this, some new research pops into my in-box, suggesting that lifting weights for less than an hour a week can reduce our risk of heart attack and stroke by 40-70%. Going beyond an hour provides no additional benefit, says the lead researcher, adding “Lifting any weight that increases resistance on your muscles is the key. Muscles don’t know the difference between digging in the yard, carrying heavy shopping bags or lifting a dumbbell.” (Study based on data from 13,000 adults in the Aerobics Center Longitudinal Study).

The centenarians of Sardinia never lifted weights. But they were constantly using their muscles as they turned spits, split firewood, changed sheets and dug the rocky barren soil they depended upon. This is the Sardinia so brilliantly evoked by Lawrence. And while we have no desire to forego all our mod cons, perhaps it’s time to get back to some of the old ways – like walking to the shops and carrying a bag of shopping home as our parents and grandparents did.
Alternatively keep a pair of weights by your kettle and do a few reps while your tea’s brewing.

Sea and Sardinia by DH Lawrence was written and published in 1921. Some of the children he described are still alive and, quite probably, the subject of several studies into longevity.

« WHO’S RESPONSIBLE FOR OUR HEALTH?
VOTE FOR US IN THE UK BLOG AWARDS (PLEASE!) »