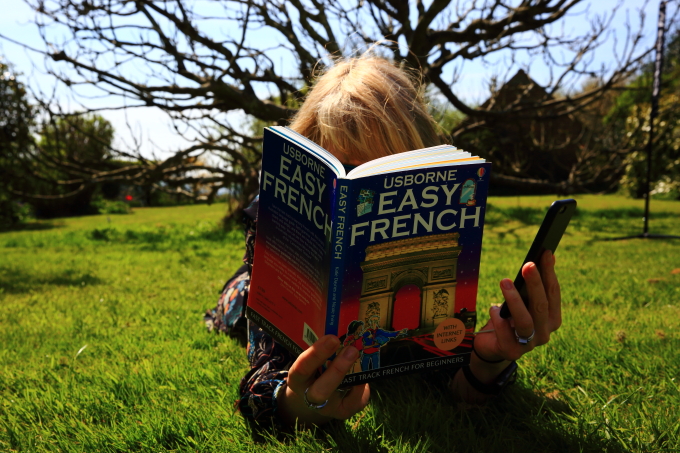 I’ve just set myself a ridiculous goal: to give a speech in French. To French people. I haven’t spoken French for a very long time. I got an embarrassingly bad grade at A-level, over thirty years ago.

But the event is in November – so I’ve got plenty of time to brush up – and I’ve discovered a great little language app that enables you to learn a language while you’re walking to work, standing in a queue at the post office, or having a quick cup of tea.

I have two reasons for wanting to put myself through a potentially humiliating experience. Firstly, when I interviewed Professor Michael Hornberger, Professor of Dementia Research at the University of East Anglia last year, he told me about his research into language learning and the effect it has on our brain’s ability to generate new neurons. Our brains love to be pushed, tested, challenged. The more complex the challenge, the better. Think of it as exercise for the brain. Learning a language or an instrument are the apotheosis of brain-exercise.

But there’s another reason. And it’s to do with the importance of having ambitious-but-attainable goals as we age.

Last week a new study was published – on the role of goals in fending off depression, anxiety and panic disorders. This study intrigued me: for years we’ve been told that having a sense of control over one’s life is essential for good mental health. We’ve been told that those of us not at the whim of circumstance are more likely to be calmer and happier.

But this new 18-year study threatens to turn that theory on its head. It found that a sense of control had no effect on the mental health of its 3000 participants (average age of 45). What counted was persevering towards meeting their goals.

This is good news. Because anyone can set themselves goals, while very few of us can honestly say we have control over the circumstances of our lives. After all, we’re living in an age of rapid technological, environmental and political change.

This study found that those who strove to meet their goals were more positive, more focussed and happier. It’s the aspiring and striving, rather than the achieving, that appears to give our lives greater meaning. And nor do goals need to be solely about oneself. We’ve set ourselves goals to reduce household plastic and air pollution, for instance.

Goals are not only for New Year’s Day. This study suggests we should regularly set ourselves goals. And if you feel like throwing in the towel, heed the words of the report’s author: ‘Giving up (on one’s goals) may offer temporary emotional relief’ but long-term the effects can be dramatically different ‘as regret and disappointment set in.’

To sum up: Make some goals. Not too many. Keep them attainable. Flaunt them. Stick at them.

I’ve flaunted my French-language goal here. And if I have to halt my ‘French speech’ mid-flow because no one understands what I’m saying, it won’t matter because I’ll have built dozens of new neurons in the process. And I’ll have genuinely striven!

We’ll be talking about goals and their importance for ageing well in our June 11th Guardian Masterclass (still a few tickets left if you’d like to join us). And we have chapters on how to rewire the brain in our book, The Age-Well Project, which we’ll be discussing on Sky News later today. Stay tuned…

« CREATIVITY, TWO BABIES AND PLENTY OF GIVEAWAYS!
HOW TO BE HAPPY: GET HEALTHY, GET MARRIED AND GO OUT FOR DINNER »