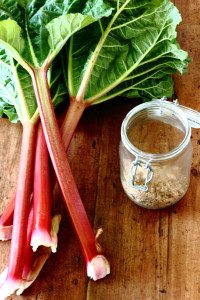 – step into the limelight! For those of you that think rhubarb can only be used in pies, think again … This month I’ve been concocting quick, delicious recipes that show just how versatile rhubarb can be.  Why?  Because rhubarb is rich in anthocyanins – anti-inflammatory anti-oxidants which researchers believe could help prevent arthritis and memory loss.  But still more compelling are rhubarb’s high levels of vitamin K (just 1-2 stems provides 45% of your recommended daily intake).   Vitamin K has been shown to limit neuronal damage in the brain – making it a potential weapon in the fight against Alzheimers (you can read more at http://www.ncbi.nlm.nih.gov/pubmed/19027415).

And it’s not just the aging brain that Vitamin K can help.  It’s essential for the formation of osteocalcin, a protein found only in bone. Several studies have linked high levels of vitamin K to improved bone density and lower fracture rates (read more at  http://www.osteoporosistreatment.co.uk/vitamin-k/)  .  Anyone worried about osteoporosis in later life should be eating Vitamin K-rich leafy vegetables – and rhubarb!

If you have a patch of earth or a large plant pot, get some rhubarb in.  It’s the easiest fruit in the world to grow. And if you’re worried about the sugar in most rhubarb recipes, replace it with acacia honey, as I’ve done in two of recipes below.

This is an adaptation of the classic Scottish dessert which my family has been eating most mornings over the Easter break.

Put the chopped rhubarb in a covered oven-proof dish with the juice of the orange quarter and the honey/sugar and cook at 180 for 10-15 minutes until soft.

Meanwhile toast the oats on the hob until pale brown and slightly crisp (approx. 10-15 minutes), making sure they don’t catch.

Chop the banana or hull the strawberries depending on which combo you prefer (although neat rhubarb is very good too) and add to the warm rhubarb.

Layer the fruit, oats and yoghurt into a bowl or tall glass and drizzle with mild honey if you prefer something sweeter. That’s all!

Rhubarb for lunch – Rhubarb, Beetroot and Roquefort Salad with Pink or Green Peppercorns

Bake the rhubarb in a covered dish with the honey and orange juice at 180 for 10-15 minutes until soft but still holding their shape. Set aside the liquid.

Chop the greens, dice the beetroot and arrange on plates with the rhubarb pieces. Scatter over the crumbled cheese and the drained peppercorns.  Make a dressing from the juice by mixing it with twice the volume of olive oil and seasoning. Pour over the vinaigrette and eat!

Rhubarb for tea (or dessert) – Rhubarb and Ginger Cake

A little more time needed for this cake, but it’s worth it!  A dense, pudding-y cake with explosions of zingy ginger, it works just as well with a dollop of crème fraiche as a dessert or with a cup of tea in the afternoon. And it keeps for days, wrapped in foil, getting better and better!  Omit the ginger if your kids don’t like it…

Add the beaten eggs and the stem ginger syrup, then stir in the flour, polenta, ground ginger and a pinch of salt.

Add the yoghurt and fold in the rhubarb mixture.

Cook for 60 minutes, covering after 30 minutes if the top is browning too quickly.

Serve warm or cold, dusted with icing sugar.  You could serve it with a rhubarb compote and cream, crème fraiche, vanilla ice cream or custard – as you like.

WHY I WON’T BE SWITCHING TO WHITE WINE THIS SUMMER »