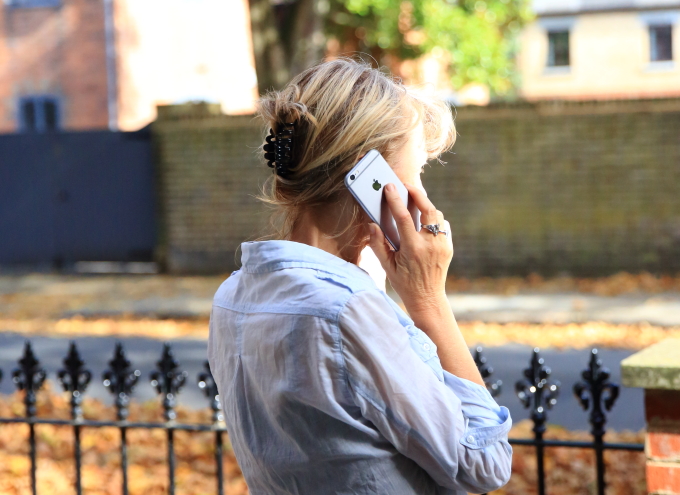 Returning from summer holidays – to work, college, or just the general hum drum of life – is, for me, always a slightly wistful time. Another summer gone, another school year finished, the chill beckon of winter with its long nights and short days.

But summer’s demise is also a time of promise and possibility. Time away from our everyday lives can provide a space for seeing things afresh and reflecting on how we might alter our lives for the better.

One of the subjects occupying my mind over the holidays was… our phones. There were two occasions when I found myself phone-less. The first was at the top of the Cairngorms in remote Scotland, where I was camping. The freezing temperature and the lack of electricity or phone signal prompted my phone to disable itself. Suddenly I was without camera, maps, music, audiobooks, connectivity of any sort. It was an odd feeling, as though I’d been cut adrift.

On the second occasion I arrived in France and for some reason my phone decided not to connect to any local signal or Wifi. This time I was without connectivity but my audio book and camera still worked. I felt neither anxiety nor any desire for digital reconnection. In fact I felt an elicit thrill of liberation. Like a child let out of school early. Without any phone, the rhythm of my days changed. And I rather liked it.

Our constant use of phones comes with a barrage of issues, including the contentious issue of radiation and a possible link to cancer, nerve damage and brain tumours. It’s now thought that the level and type of radiation emitted by mobile phones is ‘non-ionising’ implying that it can’t directly damage our DNA. And, after two decades of widespread mobile phone usage and no ensuing spike in cancer rates, most medics are discounting any link between mobile phone usage and cancer. Of course, this doesn’t mean there’s categorically no link. And there’s still the issue of EMF exposure and the radiation emitted by WiFi routers and mobile phone masts (more to come in a future post). But it does suggest that earlier concerns about phones may – possibly – have been exaggerated.

However, a recent study found a link between mobile phone use (phone calls in this case) and poorer memory retention, suggesting that even low level radiation could be impacting our memories. The impact was greater when the phone was held against the right ear – which is where the brain parts responsible for memory are located.

Easy to resolve: use head phones, loud speaker or hold the phone to your left ear. Better still, minimise use of your mobile/cell for phone calls. Texting and other apps generate no radiation.

Today, many scientists are more concerned with the behavioural impact of mobile phones. Expect many more studies on this. In fact, as I write, a new study from Lancaster University on the risks of social networking addiction has popped into my in-box, which identifies switching between social media as ‘building compulsive and excessive behaviour’ leading to addiction. The report authors recommend ‘getting away from it (social networking sites).’

Last week, two other studies on our use of digital devices (phones, ipads, laptops) dropped into my in-box. Having spent a few rare days disconnected I scoured these reports with particular interest. Can our phones really change our brains? Can we alter how we age by better regulation of our digital devices? Or should we embrace technology for its many indisputable benefits, and stop fretting?

As ever, the answer is too complex for a short blog post. But what appears increasingly clear is that we all need time away from our phones. A study from Rutgers University found that people who picked up their phones while on short breaks from challenging sets of puzzles subsequently did less well than those who weren’t allowed to pick up their phones. In fact they took 19% longer to complete the next task and solved 22% fewer problems. The researchers concluded that reaching for one’s phone during every spare minute ‘may carry increasing levels of distraction that make it difficult to return to work tasks with focussed attention… even just seeing your phone activates thoughts of checking messages, connecting with people, access to ever re-filling information and more.’ This reflects an earlier report suggesting that simply having your phone beside you reduces your ability to focus. Out of sight is clearly out of mind.

I’m as guilty as anyone of reaching for my phone at the drop of a hat – if only to ‘clear a few emails’, do a sneaky on-line French lesson or take a peak at instagram. But this study suggests that if you want a refreshed brain, put the phone away. And that’s exactly what I’ll be doing this autumn as I work on my next book. Given my early research into WiFi router radiation, I shall also be turning off the WiFi in my house more regularly.

The second report involved a more extreme experiment in which participants lost access to all their digital devices while on holiday (which mirrors my two days with a disabled phone in the Scottish mountains). Worryingly, several participants suffered from ‘anxiety, frustration and withdrawal symptoms’ at the outset. Some had to withdraw from the experiment. But most went on to have a better time… ‘with growing levels of acceptance, enjoyment and even liberation.’

What struck me most in this report was the increased social interaction reported by participants. Deprived of their phones, they engaged more with other travellers, with locals, and with their own travelling companions. They also reported being more attentive and more focussed on their surroundings, which means they’ll have stronger holiday memories. They received better holiday tips from talking to locals than they would have had from googling online sites (they said).

Those in rural locations managed better than those in cities, who felt stranded without access to Google Maps. Which leads smoothly to another issue: One of the most interesting current speculations is that use of navigation sites – like Google Maps – could increase the risk of Alzheimer’s, by encouraging our brain’s place cells to wither. I’ll be writing about this in more depth later when I report on my own map-free experiment. Watch this space.

So what have I learnt from my unintentional digital detoxes? I love the convenience of my phone, but in the future I’ll be putting it away much more rigorously and regularly than I have thus far. Because I also loved escaping the tyranny of our pixelated age. And every brain needs a break…

However, be organised! Last week I insisted on a phone-free day for my family (which includes 4 teens). Everyone got lost, failed to meet up, went to places that no longer exist, missed ‘important’ messages etc etc. It was a salutary lesson in how dependent we’ve become on our phones and how the world now expects us to be ‘always on’.

If you’ve got any thoughts on digital detoxing or any experience of EMF effects, please share your experiences in the comment box.

« What you need to know about sunscreen this summer
BUILD MUSCLE OVER 50, LIVE LONGER »