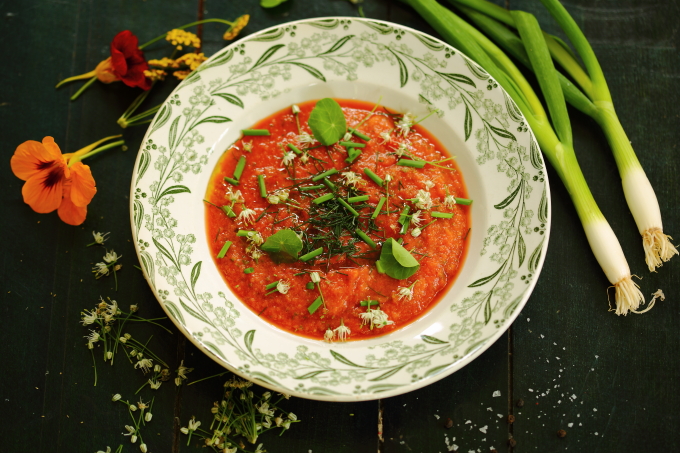 It’s a sad fact that most of us know someone affected by breast cancer. 1 in 8 women face the prospect of getting breast cancer, making it by far the most common cancer in females.  But medics and scientists now believe diet and life style can play an important role. And some of the most interesting findings are coming from a UK study at the University of Westminster, involving 3000 breast cancer patients.  It’s the biggest UK study to investigate the links between diet and breast cancer and although it’s only three years into a five year study, enough evidence has been found for one of its leaders, Professor Keshtgar, to produce a Breast Cancer Cook Book – published this week.

As you can imagine, Ms’s Kale & Cocoa were particularly eager to review the Prof’s findings and see his food recommendations.  Professor Keshtgar says the Westminster study has already shown strong evidence that breast cancer recurrence rates can be reduced – and survival rates improved – when patients adopt a healthy lifestyle.  He also believes that as many as nine per cent of  cases could be prevented by dietary changes and says his colleagues in the medical profession are confident the Mediterranean diet (read more here) can reduce the risk of breast cancer, particularly in post-menopausal women.  The key, he says, is plenty of fruit and veg – their anti-oxidants prevent the process of oxidation which can lead to cancer. A report from the University of Navarra in Spain, published this week, also suggests that extra lashings of extra-virgin olive oil can also help fend off breast cancer. Catch up at http://www.medicalnewstoday.com/articles/299412.php

But not all fruit and veg are equal. The Prof is (like us) a big fan of cruciferous vegetables (broccoli, Brussels sprouts, cauliflower, kale and cabbage have all been shown to prevent the formation of cancer cells and inhibit the spread of cancer).  Like us, he’s a believer in dark leafy vegetables (spinach, kale and chard are chock full of B vitamins which strengthen your DNA, thus reducing the risk of cancer). Lastly, he’s a big advocate of pulses – apparently the fibre can help your body repair the damage done by cancer treatments.

But he has six star ingredients women should be eating more of:

We’re big fans of all nuts and seeds but Prof Keshtgar highlights the minerals and phytoestrogens in the sesame seed that help regulate the body’s oestrogen production and are known to obstruct the production and spread of certain tumour cells.

Susan wrote about soy beans last week as a good source of vitamin D, but Keshtgar highlights their phytoestrogens, which, like sesame seeds, inhibit the growth of cancer cells.  He also points out that they’re the only vegetable to contain all nine essential amino acids.

Beetroot contains betacyanin, a compound shown in studies to have anti-carcinogenic properties and the ingredient that makes beetroot purple. I like James White Organic Beetroot Juice. And my kids go wild for the super speedy beetroot soup coming to the blog soon…

Sage is rich in phytochemicals and it’s this that experts think may help prevent the formation of cancer and/or supress its development.

A powerful source of the antioxidant lycopene (we wrote about lycopene last year), which scientists think could inhibit breast cancer by stopping cancer cell growth. Lycopene becomes more effective after cooking – and is even more potent in sundried tomatoes and watermelon.

We’re always banging on about oily fish so it’s good to see Prof Keshtgar get behind us! Salmon is the Prof’s favourite – it’s thought to contain natural chemopreventative agents that can inhibit or impede cancer. Check out my favourite salmon recipe on the blog here.

But what about foods to avoid?  If you’ve been following our blog you’ll know we’re trying to reduce the amounts of red meat, sugar and processed food in our larders. And these are exactly the foods that Professor Keshtgar says we should reduce or avoid altogether.  He also warns against alcohol – consumption of which has been linked to an increase in both the risk of developing breast cancer and the likelihood of breast cancer recurrence (and that includes light drinkers too!)  Apparently three or more alcoholic drinks a day can increase your risk of breast cancer by 40–50 per cent.  Wow! A report published in August suggested that anyone with a family history of cancer should consider abstaining from alcohol altogether. Read more at http://www.medicalnewstoday.com/articles/298303.php

Finally, the Prof cites several studies linking exercise to a reduced risk of breast cancer.  Apparently five percent of cases could be avoided by doing nothing more than staying slim. It seems that exercise lowers oestrogen levels which affects how we process and store the food we eat.

After eating far too much on holiday, I’ve been preparing a weekly quantity of easy-peasy Gazpacho which not only fills me with vegetables (and lots of cooked tomatoes to help keep breast cancer at bay) but helps keep the weight off.  It also reminds me of sunshiny days as autumn gets its claws in… And because there’s no skinning of tomatoes or peeling of cucumbers, it takes a mere five minutes to prepare. Try topping it with cooked soy beans for an extra boost of phytoestrogens…. And don’t forget the generous drizzle of extra-virgin olive oil!

Put everything in the blender (you’ll need a powerful liquidiser rather than a food processor if you want it really smooth) and wizz.

Season to taste and top with a generous drizzle of extra virgin olive oil.  Make it your own by topping extravagantly with chopped herbs (I like fennel fronds, basil and chives), edible flowers, baby nasturtium leaves, chopped dandelion leaves, watercress or spring onions.  And, of course, a handful of soy beans (put frozen beans into boiling water, turn off the heat and leave for ten minutes).