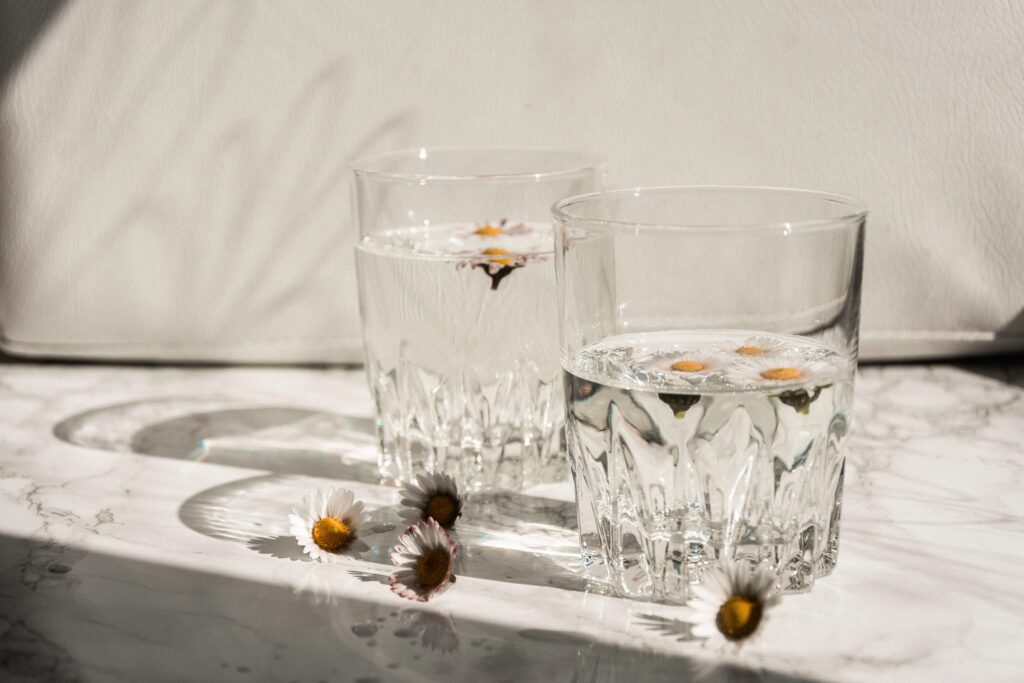 One question that comes up time and time again when I’m coaching is “how much water should I drink?”. Often followed by “but water’s so boring!” Which is true, so read on to discover my new favourite ‘tipple’. The honest answer to the first question is that we’re all different and the amount of water (or non-caffeinated, non-sugary liquid) we consume varies according to how active and how big we are. A woman of four foot 10 doesn’t need as much fluid as a six-foot man. Frequent exercisers need more, and so on. But the sweet spot is around – very roughly – 1.5-2 litres a day.

As we age, our thirst sensors become less sensitive so it’s important to drink before we start to feel the need for it. By that point, we’re heading towards dehydration. And there are plenty of other causes of the early symptoms of dehydration – dry mouth, fatigue, dizziness – so it’s easy to overlook and pin those symptoms on something else.

Research published late in 2020 found that, as we age, we need to drink more water. This is because our bodies become less adaptive to variations in body temperature caused by exercise and our environment. When we’re younger, our body ensures we don’t sweat so much that we become dehydrated during exercise or hot weather. As we get older, this system becomes less efficient, so we need to make sure we consume enough water to compensate.

We know that staying hydrated is important, but a report published last month has got me thinking about what else water does for us. It seems that the source and quality of our drinking water can impacts our gut microbiota. This makes sense, of course, as there’s no other substance we consume more of, and our microbiota respond to everything we ingest.

A French research team looked at a variety of water sources – tap, bottled, filtered and well – and compared the impact on the microbiome of over 3000 people. They found the greatest microbiome diversity in those consuming well water. Not an option for many of us, obviously. They also found that people drinking less than a litre of water, of any type, each day, were more likely to carry a higher concentration of bacteria linked to food poisoning. A reminder of the importance of drinking enough water, and of the sensitivity of the gut.

Talking of which, I want to share a new paper with you which is a clear reminder of the importance of good gut health. In research published earlier this month, scientists looked at the microbial diversity and cognitive abilities of 600 people, with a mean age of 55. They found that participants who had higher levels of specific microbiota, including Akkermansia, performed better in cognitive tests. The research team believe this may be because microbiota like Akkermansia produce short chain fatty acids which have a beneficial effect on the gut-brain axis. Keep your Akkermansia well fed with cranberries, walnuts, oily fish and tea.

WHAT TO DRINK WHEN YOU’RE NOT DRINKING

There’s been much debate about what to drink when we’re ‘not drinking’ among attendees of my Eat Well to Age Well course. There have been lots of great suggestions like Seedlip, the non-alcoholic ‘gin’. I like kombucha, a fermented tea which is good for gut health, but costs about the same as a reasonable bottle of wine. My favourite suggestion from the group is one that’s both cheap and beneficial for health: a spoonful of apple cider vinegar in sparkling water. Try a teaspoon of ACV in 250ml of fizzy water if you want to give it a go. With ice and a slice of lemon it tastes like a not-gin, for a fraction of the cost. Apple cider vinegar consumption has been linked to lower blood sugar after high carb meals, a more stable insulin response and even weight loss. Definitely my new tipple of choice.

« ARE YOU GETTING ENOUGH LIGHT? ENOUGH DARK?
WHAT’S IMPACTING YOUR SLEEP AND A FREE YOGA NIDRA SESSION »