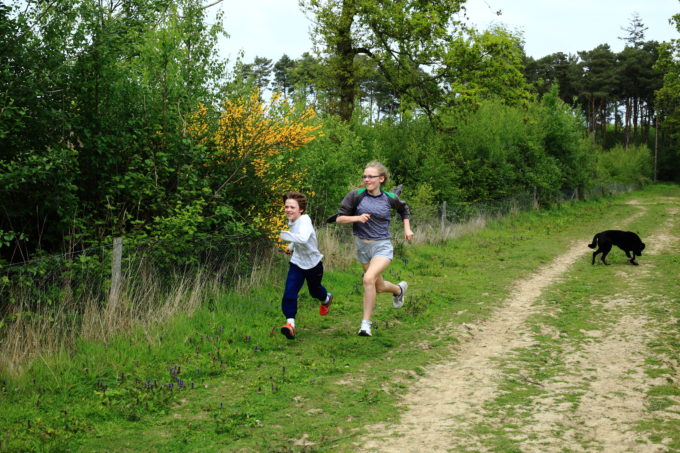 If any of you have children or grandchildren (especially teens) who aren’t getting enough exercise (think Fortnight, social media, Netflix box sets… you get the gist), today’s post is the fuel you need to turn the wifi off. It also offers hope to anyone temporarily bedbound, injured or in a sedentary job.

And so I’m dedicating this post to my sister-in-law, who fell off her bike last year and sustained multiple broken bones. Indeed, her injuries were so severe, her surgeon said there was a 40% chance she’d need her leg amputated. With her long-term prognosis still unclear, she hasn’t yet ruled out having an amputation. Unable to move for several months, she’s now hopping around on crutches and life is looking a little brighter. It’ll be another year before she can walk again, but I hope this latest research gives her – and others in the same position – a new thread of hope.

Until recently we’ve been told that our muscles die if we don’t use them. ‘Use it or lose it’ was the phrase bandied around by scientists who thought that when muscles shrunk and atrophied from inactivity, the myonuclei – the cell centres that build muscle fibres – were also lost forever.

Not so. According to a new report in Frontiers in Physiology, the cells – the myonuclei – we gain from exercise stick around, even when our muscles shrink through lack of use. They effectively hibernate, but as soon as we start exercising again, they spring into action, enabling greater and faster muscle growth. The report’s author, Professor Schwartz, says this allows us to ‘bank’ muscle growth potential (ideally in our teens but it’s never too late) that can prevent frailty in our old age.

Apparently our biggest cells are in our muscles, where they’re fused tightly together in a special type of tissue called syncytium. The fusing here is so dense the cells behave more like a huge single cell.
‘Heart, bone and even placenta are built on these networks of cells’ says Professor Schwartz. ‘But by far our biggest cells – and biggest syncytia – are our muscles.’

When our muscles grow (through exercise), new nuclei are produced from stem cells to meet the extra demand. Prof Schwartz’s studies, carried out on rodents and insects, suggest these new cells are never lost. Not even after our muscles begin to die, either through inactivity or through a process known as sarcopenia, the natural loss of muscle as we age. This indicates that once a nucleus has been acquired by a muscle fibre, it belongs to the muscle syncytium, possibly forever. Which may explain the phenomenon of ‘muscle memory’, a term coined by scientists who discovered that it was much easier to reacquire muscle fitness than to achieve it in the first place.

Prof Schwartz wants to rewrite the old adage as ‘Use it or lose it – until you use it again.’ This is great news for my sister-in-law who spent her teenage years walking, cycling and playing hockey on a clifftop hockey pitch in biting winds.

But it’s also a wake-up call to all of us with children living increasingly screen-bound, sedentary lives. And that’s before I start ranting about all the children who prefer sitting in a car to walking, and schools who don’t offer enough exercise in the curriculum.

My teens won’t take it from me, so I’ll be quoting Prof Schwartz to them: ‘The discovery that myonuclei are retained indefinitely emphasizes the importance of exercise in early life. During adolescence, muscle growth is enhanced by hormones, nutrition and a robust pool of stem cells, making it an ideal period for individuals to “bank” myonuclei that can be drawn upon to remain active in old age.’

No recipe this week: I’m too busy laying down muscle for the future.