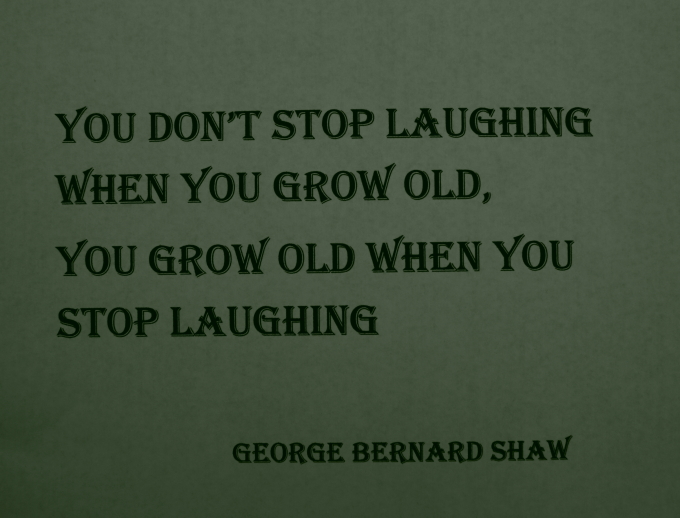 We’re a mere five weeks away from the 2019 World Laughter Day. Here in the UK we desperately need some light-hearted laughter. Three years of Brexit wrangling has resulted in a 20% surge in the purchase of self-help books: it seems we’re all feeling gloomy and doomy.

So roll on World Laughter Day, I say. Didn’t know such a day existed? No, nor me. I unearthed it, innocently enough, at a session of laughter yoga as I researched the healing powers of laughter. Assuming a laughter yoga class would include some yoga, I turned up in my gym kit only to find everyone else was in normal clothes. So my first laugh was a mortified guffaw.

The session felt oddly like a toddler music class – where you sit on a cold mildewed floor in a church hall, clapping, grinning and singing ‘The wheels of the bus go round and round.’ But without any toddlers. We played grandmother’s footsteps; we batted balloons around; we spoke in gibberish (actually that was quite liberating – I’ve always liked a bit of nonsense-speak). Oh, and we laughed. A lot. We ended with a laughing meditation, a peculiar experience which brought to (my) mind Mr Rochester’s mad wife in Jane Eyre. We lay on the floor, eyes closed, and faked howls of laughter. I couldn’t quite manage it. Too uptight. As I listened to my fellow howlers all I could think of was Bertha Rochester laughing manically while poor little Jane Eyre trembled in her four poster bed.

THE SCIENCE BEHIND LAUGHTER AND HEALTH

Laughter yoga has sound scientific origins, however. It was ‘invented’ by an Indian doctor who realised that laughter relaxed his patients, causing their blood pressure to drop. He also noticed that they could tolerate greater pain when they were laughing. Laughter releases endorphins and there’s evidence that it doesn’t need to be genuine either. As our instructor told us, ‘fake it until you feel it.’

Neuroscience support the words of my laughter yoga instructor (the perfectly named Lady Ha-Ha). In Dr Sabina Brennan’s new book, 100 Days to a Younger Brain, Brennan (an Irish neuroscientist) highlights the role of laughter in positive thought. Thinking positively, she tells us, is one of the best things we can do for our brain. She argues that negative thoughts – and negativity in general – are detrimental to tip top brain health, and that laughter is one of the best antidotes.

‘If, like me, your resting face is not a smiling face you need to make a conscious effort to smile,’ she explained in The Times. ‘Smiling activates reward circuits in your brain and boosts brain health by releasing hormones that lower blood pressure, boost immune function and protect against stress, depression and anxiety.’ Smiling can trigger happiness as well as be the consequence of it, she adds, suggesting that it’s especially important to smile at tough moments.

Dr Brennan’s comments on happiness reflect a recent report from Singapore which found happier people were 19% less likely to die, over a given period, than their gloomier counterparts. “Our findings indicate that even small increments in happiness may be beneficial to older people’s longevity,” explained Assistant Professor Rahul Malhotra, Head of Research at Duke-NUS’ Centre for Ageing Research and Education.

WHY OUR BRAINS ALSO LOVE A SMILE

Smiling is almost as good as laughing. Pulling one’s mouth into a (sculpted) smile is a simple effective way to lift your mood. According to Dr Isha Gupta, a neurologist, when we smile we trigger a chemical reaction in the brain, releasing feel-good dopamine and serotonin.  Not only that, but if we smile at someone else, they also benefit.

So would I recommend laughter yoga? I certainly laughed.  But I laughed an awful lot more over a game of Scattergories in which The Husband tried to convince us that hedgehog ice cream and horse soup were genuine ‘foods beginning with H’.

Humour is highly subjective (we like puns and games in our family), but anyone can smile. Or sculpt a smile. So have a go. Let us know if a big smile makes you feel any better.

Back to laughter yoga…We also clapped a lot. Apparently the palms of our hands are full of pressure points and when we clap, we release energy. Clapping, I realised, is quite invigorating. As is laughing. Both are best done in the company of others, but I’ve been experimenting entirely on my own (like Bertha Rochester).

And World Laughter Day can be investigated here http://www.worldlaughterday.com/

PS Air purifier post coming later. Not forgotten… And more on laughter in our upcoming audio (yes, The Age-Well Project is being recorded as an audio book so you can listen as you walk, cook etc) and book.

« GRAIN BOWLS: MEALS THAT HAVE IT ALL
10 ESSENTIAL DIET TIPS TO LIVE LONGER (AND A BIG REVEAL) »